Between the Charlie Hebdo and Nice massacres, French media changed their approach to such violent attacks, and the public’s reaction changed too 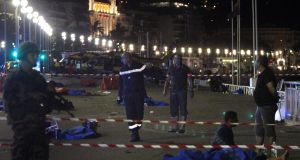 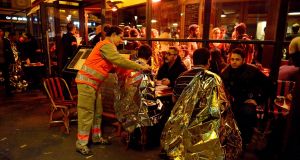 Survivors at a cafe after the Bataclan attack in November. Photograph: Antoine auantoniol/Getty 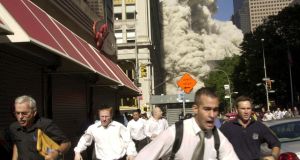 Two-hundred-and-thirty-seven people have been killed in eight jihadist attacks in France since January 7th, 2015. The killings have provoked a debate about journalistic ethics. The questions of what should be reported and how were discussed at a symposium at the University of Paris this week, organised by Les Entretiens de l’Information and the Observatoire de la Déontologie de l’Information.

On the night of July 14th, 2016, Mohamed Lahouaiej-Bouhlel, a Tunisian-born lorry driver living in Nice, killed 86 people and injured 434 others by mowing them down with a 19-tonne rental lorry, after Bastille Day fireworks on the Promenade des Anglais. By chance Damien Allemand, head of digital news at the Nice Matin newspaper, had attended the fireworks display and telephoned his newsdesk moments after he barely escaped being run over.

“Less than five minutes after the attack we reported precise information, explaining that it was a lorry and a terrorist act,” Denis Carreaux, the director of Nice Matin, told the symposium.

The newspaper’s website crashed under the “colossal” number of viewers, Carreaux said. It published updates on its Facebook page, where it debunked rumours spread by social media of a hostage-taking, of a simultaneous attack down the coast in Cannes, and of the lorry having been rigged with explosives.

“We kept our sangfroid and bore in mind the fundamentals of journalism, to check out and verify information,” Carreaux said. “The refutations we posted were tantamount to official denials . . . Everybody is a journalist today. Everybody sends news. But there’s the power of the brand . . . We may have lost the battle of speed. We may no longer be the first to have the news. But we have not lost the battle of legitimacy, of credibility.”

Allemand posted his eye-witness account three hours later. “I saw bodies fly into the air like bowling pins. I heard screams I shall never forget. I was paralysed with fear. All around me, it was panic. People running, screaming, crying . . . lifeless bodies every five metres, limbs, blood.”

While teams of reporters rushed to the scene the newsdesk sifted through the stomach-churning amateur videos and photographs that flooded in via social media.

“We decided not to use any of them,” Carreaux said. “The hardest image we used was on the front page, of bodies under sheets. We had to show the scale of the horror. But no blood; no bodies. In the written accounts I cut some things that went too far.”

The newspaper published 150 pages on the attacks in 15 days.

Overall, Carreaux believes, the effect of social media was more positive than negative. Nice Matin’s Facebook page became a rallying point for people searching for family members. The newspaper found one of the heroes of the attack, a 49-year-old airport worker called Franck, after his son wrote “he’s my father” on the Facebook page. Franck pursued the lorry on his scooter, climbed on to the running board and attacked Lahouaiej-Bouhlel with his hands while the killer fired a pistol at him. Their duel ended only when police shot Lahouaiej-Bouhlel dead.

Social media raised more than €30,000 for victims of the attacks, and funds for a new scooter for Franck. It also enabled Nice Matin to find the families of most of the victims, so the newspaper could publish photographs and pen portraits of the dead.

Grégoire Lemarchand, head of social media at Agence France Presse, said that although the wire agency employs 1,400 journalists worldwide it no longer gets there first. “Social media beat us to it now,” he admitted. “Our work has become complementary. We send teams to the spot, and research social networks. We do it very fast, because our subscribers are waiting.”

Like Nice Matin AFP decided against using the grisly videos it found on the web, and published only one photograph of people running in panic. Lemarchand stressed the importance of traceability – of always following an image or piece of information back to the original sender, and verifying his or her identity.

Every day, Lemarchand said, AFP publishes images of the war in Syria that it could not distribute if they occurred in France. Four years ago Massoud Hossaini, an Afghan photographer for AFP in Kabul, won a Pulitzer prize for a photograph of a blood-splattered girl standing in the midst of bodies, screaming. “If we’d had the same photo from Nice I don’t think we would have released it,” Lemarchand said.

Anne Kerloc’h, head of social media at the daily newspaper 20 Minutes, said that reader reaction changed dramatically between the November 13th attacks and Nice. “After the Bataclan we received a lot of photos of candles and poems. There was intense, collective emotion. When Nice happened the response was violent.

“We have a Facebook community of two million,” Kerloc’h continued. “The more attacks happen, the more angry people become . . . I’m not talking about commentary on our website; that’s marginal. Some days we get 20,000 comments on our Facebook page.”

20 Minutes does not have the resources to sanitise its Facebook page of hate speech against Muslims, so like other media it subcontracts to “moderation” companies to remove it. The two principal moderators are Netino and Concileo.

One can no longer find jihadist websites or images of gore via internet search engines, participants at the symposium noted. To find Islamic State executions, for example, one must access the “dark web”, which requires specific software, configurations or authorisations.

Back in 1986, as president, François Mitterrand created the High Audiovisual Council (CSA). It enforces two legal limits on the freedom of expression, explained Thomas Dautieu, the CSA’s deputy director: “respect for human dignity and respect for public order.”

In July the National Assembly tasked the CSA with drawing up a charter of ethics for coverage of terrorist attacks. The document is expected next month.

on the day of the Charlie Hebdo killings. “You heard the victim’s voice and saw his distressed face,” Dautieu said. “This was contrary to human dignity and should not have been broadcast.”

The CSA also punished networks that broadcast images of security forces outside the Hypercacher supermarket and a printing plant where jihadists holed up in January 2015. Such images could help the killers and thus endangered public order, Dautieu said. The first thing Amedy Coulibaly did after taking hostages in the supermarket was to turn on the television, he noted.

On the night of the Nice massacre France 2 television broadcast an interview with a grieving man cradling his wife’s body on the Promenade des Anglais. “We received thousands of complaints,” Dautieu said. The CSA is considering further sanctions against the network.

Seasoned television journalists disputed the right of the CSA, whose board is government appointed, to determine what can be broadcast. “I was not shocked by the interview on France 2,” said an editor from that station. “The journalist showed a great deal of sympathy. The victim was an Arab Muslim, which was also worth knowing.”

“We broadcast the footage of the policeman in Belgium,” said a television editor from Brussels. “It conveyed three news elements that deserved to be broadcast: how the jihadists view police; the total absence of respect for human life; the fact that the policeman was a Muslim. The CSA’s decision contravenes press freedom.”

Opinion is most divided regarding coverage of the jihadists themselves. Following the Nice massacre and the murder of Fr Jacques Hamel, in Normandy, French media split on the freedom-versus-responsibility question.

BFMTV, Le Monde and the France Médias Monde conglomerate announced that they would no longer publish photographs of terrorists. The Europe 1 radio station refuses to name killers at all, while the Catholic newspaper La Croix will publish only the first name and the initial of the last name.

Le Figaro, Libération and France TV refused to follow, and continue to publish the names and biographies of attackers.

Advocates of self-censorship want to deprive terrorists of “glory”, but their opponents counter that there is no evidence that jihadists are motivated by coverage in western media, which they despise.

“Some of the big media are schizophrenic,” said Francois Ernenwein, editor-in-chief of La Croix. “They are impeccable on paper, but they don’t hesitate to distribute trash on the web.”

An intermediate approach, advocated by several speakers at the symposium, is to publish only police mugshots or identity photos of the jihadists, and to avoid constant repetition of their stories on 24-hour news channels.

Such debates are not unprecedented. The historian Patrick Eveno said that during the first World War the French and Germans initially published only photographs of enemy victims.

After 9/11, the sociologist Gérôme Truc said, “a reader’s letter praised Libération for showing what the Americans had hidden, that is to say the blood, the dead and wounded . . . Now the French are clamouring for censorship of images they regretted the Americans didn’t show. Because it’s closer to us there’s a different threshold of tolerance.”