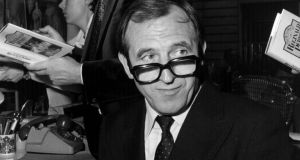 Nobbs wrote the Reginald Perrin novels which were turned into a much-loved sitcom that originally ran between 1976 and 1979. They starred Leonard Rossiter as a man constantly on the verge of a mid-life crisis but with a vivid imagination.

Born in Orpington, Kent, and educated at Marlborough College then Cambridge, Nobbs first worked as a journalist at the Sheffield Star, later calling himself the “world’s worst newspaper reporter”.

Journalism’s loss was comedy’s gain and he got his big break writing for the hit satire show That Was the Week, That Was. Work on the Two Ronnies followed – the “Pisprununciation” sketch being a favourite of many.

Nobbs wrote more novels before creating the smash hit Reggie Perrin. He was to say that the inspiration for the jaded, frustrated hero of the show came from being a schoolboy and watching businessmen catching the same train in the same clothes reading the same newspaper every day.

A further spark came from reading a magazine article about the launch of a new flavour of jam, later commenting: “It seemed so very, very boring for all the people involved.”

The BBC show Pebble Mill turned down his plays about a food executive losing his marbles, but he persisted, turning the idea into novels which were made into one of the 1970s most popular shows, starring Leonard Rossiter. His characters, including the boorish CJ with his self-satisfied “I didn’t get where I am today without . . .” catchphrase, became part of Britain’s national consciousness.

On his website, Nobbs recalled knowing he had a hit on his hands when he was staying in a Leeds hotel and saw three men waiting by the lifts. He wrote: “One of them said, ‘I’m going up the stairs. I didn’t get where I am today by hanging around waiting for lifts’ and the other two said, ‘Great’ and ‘Super’.” It made him feel like dancing, he said.

He remained amazed at the legacy of the show, and when someone faked their own death it was still referred to as “doing a Reggie Perrin”.

A Bit Of A Do, featuring two families, one posher than the other, at public events was another of his huge hits, commanding audiences of 15 million.

Nobbs also wrote the cult hit Fairly Secret Army, with Geoffrey Palmer in the lead, who was obsessed with lefties taking over Britain. His clipped delivery was much copied at the time.

Nobbs, who was twice married, with four step-children, lived in Harrogate. He was a patron of the British Humanist Association.

Tributes poured in from the world of comedy last night. Stephen Fry wrote: “Oh no! David Nobbs has died. I liked him very very much. Such a brilliant comic writer and such a kind, wise man.”

John Cleese described the Perrin shows as his “masterwork”. He posted on Twitter: “Very sad today to hear of the death of David Nobbs. First worked with him on the Frost Report in 1966 . . . a lovely kind, gentle man with a delicious sense of humour.”

The Office creator Ricky Gervais said. “I didn’t get where I am today by not knowing what a genius David Nobbs was. RIP.”

Little Britain star Matt Lucas wrote: “Reggie Perrin and A Bit Of A Do were masterpieces. David Nobbs leaves the world a richer place.” PA