Five Labour Party TDs supported a call from Ictu that all trade unionists, including journalists and broadcasters, should refuse to co-operate with the controversial visit of an all-white South African rugby team to Ireland, prompting this editorial in reply 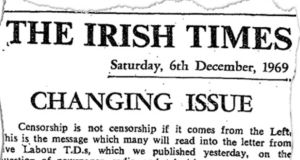 Censorship is not censorship if it comes from the left. This is the message which many will read into the letter from five Labour TDs, which we published yesterday, on the question of newspaper, radio and television coverage of the Springboks’ matches arranged for January in Dublin and Limerick.

The TDs would not see it in this way, but such is the ground they are on – dangerous ground from which, it is hoped, they will withdraw. Labour is in danger of pushing the issue to a point where it becomes no longer one of for or against apartheid but for or against free reporting – a dismaying prospect.

Dr Conor Cruise O’Brien, after all, was once managing director of the Irish News Agency, set up to try to remedy what was widely believed to be suppression of Irish news abroad. Dr Thornley was until recently a member of the 7 Days team at RTÉ, and on more than one occasion that unit has had to complain of suppression.

The letter from the five must cause some employees of RTÉ to reflect what their ability to cover news would be under a Labour government.

The letter endeavours to make a difference between general coverage of the Springboks’ visit here – if they do come –and the reporting of the rugby games.

This is a false position. Just as well might Mr Paisley, on the occasion of the abortive visit of the Bishop of Ripon to Belfast, have said: “Cover the scenes outside [the protests by my people] but don’t give a word of that man’s address”.

This is not the first time that members of the Labour Party have been selective about publication. While the party was making good use of the news that Mr Haughey had sold his house and land for more than £200,000, there was a reluctance to admit that Mr Justin Keating had sold his property for a considerable sum. Mr Haughey was a Minister; Mr Keating was only a potential TD; there was a difference, but the chief difference to some people seemed to be simply that between Them and Us.

The policy of The Irish Times on the question of apartheid is well-known and unequivocal. The policy of the paper towards the news of the day is just as widely recognised; we print it, and we try to report it as fully and accurately as possible. We do not claim to be unbiased and on most issues could scarcely be neutral. We do hold, however, that the public has a right to know what is going on.

Any attempt, whether stated to be on moral grounds or other, to deprive readers of that right must be looked at with the greatest possible suspicion. Mr [Brendan] Corish and his colleagues of the Labour Party have every right to disagree. But reporting the news, whether it is scientific, educational, sporting or any other kind of news, is basically the job of a newspaper. Likewise, the reporting of the Springboks’ matches.

There was a reference by the five TDs to Auschwitz guards [asking if a match against a visiting team of concentration camp guards would have been covered]. There might not have been any guards or any Auschwitz if the press in Germany had not, possibly in some cases voluntarily, in most cases under duress, in minor matters and in grave matters, abandoned the policy of printing the news good and bad.

The trade unions do have a point in saying that these matches are not normal sporting events. They fall into the category, they may think, of political demonstrations because of the nature of the Springboks team, but it must not be forgotten that the first casualties in South Africa were the liberal voices. One of the worst faults of the present South African regime is the management of the news media.

If there are journalists in The Irish Times who feel, in conscience, that they cannot cover the event, this, as always, will be recognised. If the Springboks come, their visit and the matches should be fully reported. To be selective in this matter would be against the best traditions of a free press and the professionalism of Irish journalists.

Read the original at iti.ms/1vQcLxP