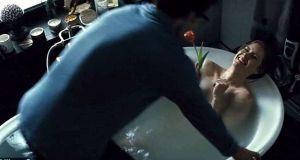 Henry Carvill as a clothed Clark Kent and Amy Adams as a naked Lois Lane in Batman v Superman: Dawn of Justice

We should have more engorged penises on TV and film. Where have you gone, reader? Let me fan you back to consciousness with the Weekend Review supplement.

As happens most weeks, a report has emerged to tell us something we already knew. It seems that female nudity is about three times more common than male nudity in Hollywood films. Take a look at Batman v Superman: Dawn of Justice (if you have more time than sense). Amy Adams, who plays Lois Lane, is required to remove everything and smirk from the bath. Henry Cavill, this year’s Clark Kent, remains fully covered when he joins her for a soak. What the heck was going on?

The report from Mount Saint Mary’s University, in Los Angeles, comes at a convenient point in the calendar. More Rada graduates are about to have brains spread theatrically across the Giant’s Causeway. Yes, Game of Thrones will return in two weeks.

When not revealing the cast’s damp innards to audiences, the Thrones team devote much attention to the pink stuff on the outside. Despite the challenging Ulster weather the characters resist no opportunity to disrobe and roll lubriciously about scattered animal skins.

Yet we see a great more female than male flesh. For all the literal unsheathing of weapons the audience sees few metaphorical mighty swords. Why is that?

Let’s get the technical stuff out of the way. Convention has decreed that women have more rude bits than men. We all have nasty bottoms and horrible genitals, but, whereas society is neutral on the male nipple, women’s breasts are deemed to be disgustingly provocative. Ladies need remove less clothing to render themselves “partially naked”.

Then there is the sheer prominence of the male genital. As all but perverts will agree, the most revolting body parts are those associated with reproduction.

Even when a woman is fully naked her pudendum remains concealed in a discreet junction. Photograph the bottom half of a female human and you may get away with revealing nothing too appalling. The penis will not be so contained. It has no atrium in which to retract. Who’d want it anyway?

It’s little wonder religious people are so appalled by male genitalia. Whereas a divine being could be imagined creating most other parts of the outer human, the penis looks like the work of squabbling interns covering for God on a busy afternoon. The straight bit doesn’t go with the round bits. It looks pathetic when flaccid. When aroused it breaks up the line of the body.

None of these practical considerations should be taken seriously. This is really about – and always has been about – the dominance of the manly gaze. For the past millennium or so the chaps have decided what class of flesh will be displayed before audiences. Caravaggio may have revelled in male sexuality, but, as time progressed and the heterosexual heel ground down, such expressions were pushed to the sidelines. Nude bosoms appeared on the figurehead of ships and the tattooed arms of sailors who manned the crow’s nests.

Running parallel to heterosexual desire made artistic flesh, we note a stubborn paranoia, particularly in the United States, about any suggestion of the homosexual.

When Zack Snyder’s Watchmen, a clunky adaptation of a great comic, was released, in 2009, a staggering amount of the online commentary focused on the decision to include Dr Manhattan’s big blue penis. Young men who didn’t think to mention the bosoms scattered throughout popular culture pompously declared themselves “all right” with the (unthreateningly limp) sapphire member.

As somebody from a Northern Irish Protestant background, who was taught feminist theory during the raunch-averse early 1980s, I am simultaneously embarrassed and appalled by any public displays of sexual lasciviousness. That Diet Coke advertisement with the nude labourer is almost as unacceptable as Benny Hill’s pursuit of scantily clad nurses. The notion that Kim Kardashian’s nude selfies might be “empowering” seems so ludicrous as to defy satire. Still, if we must have embarrassing sex on telly – and it seems we must – then the same rules should apply to the unsheathed Johnson as apply to the sunlit lady garden.

Michael Lombardo, president of programming at HBO, which produces Game of Thrones, appears to appreciate the hypocrisy. “Why is a man’s genitalia so much more verboten? If you ask guys, they’re going to go, ‘Well, you know, guys are sensitive about size,’ ” he said recently. “That’s bullshit . . . Put a female showrunner on. Trust me, it’s going to be equal opportunity.”

But isn’t the showrunner or producer your call, Michael?