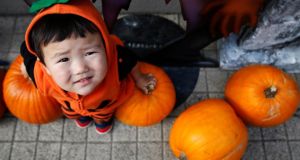 Trick or treating; when kids get to binge on sweeties and dress up as clever popular culture references, the one night of the year when it is acceptable to walk door to door asking for food from your neighbours. But where did it all begin? Who decided a particularly good Maleficent costume deserved a bin bag full of nuts? We’ve done a bit of (grave) digging to find out. You can thank us later for your impressive by-the-bonfire chat.

1. The dead arrived with the Celts

Halloween as we know it is a pretty modern concept. The spooky celebration is (like all good things) actually originally Celtic. On Samhain, as the Celts called it, the realms of the living and the dead would overlap, allowing the dead to roam the earth.

2. The Celts were zombie chameleons

The living were pretty spooked by all the spirits wandering around, so they had the bright idea of dressing as the dead (so as to hide among them). The spirits were fooled and so the first Halloween costumes were born (note; no naughty nymph costumes here)

3. The Catholic Church own Halloween

When the Catholic Church arrived they were keen on stamping out all the old Celtic traditions, so they changed the festival name and called it their own. Samhain became All Soul’s Day or All Hallows Day, and the day before became All Hallows Eve, which eventually shortened to Halloween. (Wonder if that got Oxford dictionary word of the year?)

On this now Christian holiday for honouring the dead, poor people would go from house to house begging for the delicious sounding ‘soul cake’ in exchange for prayers for deceased relatives. This was known as ‘souling’.

A few decades later a practice called ‘guising’ was in full swing in Scotland and Ireland. Short for ‘disguising’, children would go out from door to door dressed in costume and rather than pledging to pray, they would tell a joke, sing a song or perform another sort of “trick” in exchange for food or money.

6. Americans took it to the next level (surprise)

In the 1840s the large number of Irish arrivals on American shores spread the traditions of ‘souling’ and ‘guising’ across the world. The first reference to ‘trick-or-treating’ popped up in North America in the 1930s, although the trick part was taken a little more seriously back then. The Great Depression is thought to have intensified the problem, and trick-or-treating often devolved into plain old vandalism and violence.

The second World War curtailed this problem, as sugar was rationed, and war trick-or-treating emerges as the community based, family orientated activity we recognise today.

8. Trunks aren’t as scary as they sound

What’s next for trick-or-treating? In some southern US states a phenomenon called ‘Trunk-or-Treat’ has been gaining popularity. Parents, frightened of their kids visiting strangers' houses, are meeting in groups in car parks instead. The child goes from car to car, boots are opened and treats are given away. Not spooky at all.

In Ireland, the old fashioned, mid-1980s, house visiting tradition remains, albeit with some notable differences. The expression trick or treat has only been used at front doors for the last 10 to 15 years. Before that "Help the Halloween Party" seems to have been the most popular phrase to holler, although in Carlow and some other inland towns "Penny for the Pookie" was also favoured.

10. Children in Dublin are eating money

Finally, what are children stuffing their faces with on All Hallows Eve? In Dublin, many houses are giving away money rather than sweets, but there is also talk of mini Mars Bars on some estates. And monkey nuts? Parents in the capital are avoiding these altogether due to a rise in nut allergies. Spooktacular.