This breakneck two-hander will smack you upside the head 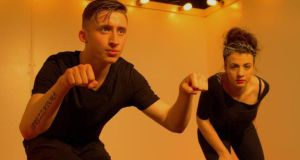 Nicknames tend to stick in Lee Coffey’s accelerated, ultra-violent vision of young urban Dublin. Why is Conall Keating’s good-looking avenger called Leper? Because he once burned his leg. Why is Amelia Clarke Stewart’s spirited fighter called Chip? Because of her imperfect dentistry. As names go, they are at least something out of the ordinary: a condition to which almost everyone in Coffey’s debut play aspires. This breakneck two-hander monologue is, likewise, ultimately about the search for excitement.

If the form is familiar, from the crosscutting, imagistic Dublin monologues of Mark O’Rowe, that’s telling. Director Karl Shiels, a frequent actor for O’Rowe, knows such work from the inside and here again is a new generation of theatre writers trying to make explosions with limited resources. You couldn’t say that Leper + Chip – which begins as a punch-up in a house party, swells into a revenge plot and resolves in a love story complicated by gangland vendettas – breaks entirely new ground, but the speed and precision of the performers, aided by minimal, emphatic design, make it a breathlessly exciting 45 minutes.

No word is repeated more than “Smack!”, yelped each time by Keating and Clarke Stewart in stereo, as Eoghan Carrick’s lighting effect packs a punch. So much so, that it’s not clear if violence is supposed to be anything more than cartoonish in Coffey’s play. Early, when Chip is nominated to seduce Leper, she tells her friends, “Alright, but if I get raped I’m going to burst youse.” That’s something more than a salty retort. And although a scene where Leper seduces a woman in her 50s is funny, his thoughts about her and most women are amazingly, troublingly contemptuous.

The toughness is overstated, perhaps, to suggest people who ordinarily barely relate to each other: when Keating and Clarke Stewart do get together, it’s deliberately sweet. Significantly, the monologues pause and they finally address each other. We even learn their names.

The play has a rendezvous with sensationalism, though, rushing its characters into calamitous coincidences (Smack!), while hoping finally for the tragic echo of star-crossed lovers. It’s all a bit too moralising and abrupt to earn it, and Shiels seems to recognise the play’s true nature with a hyper-stylised coda. Finally, Leper and Chip seem more cool than real. It’s what they would have wanted.

Radical Wordsworth: Focusing on the ‘spots of time’ of poet’s greatest work
6