Written fitfully during the first World War and finally presented to an utterly changed world, Shaw’s experimental play remains tangled and complex. Can the Abbey make sense of it? 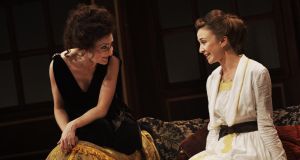 Can you expect a stable play to emerge from a time of extraordinary upheaval? Conceived before the outbreak of the first World War and written – painfully and fitfully – throughout its course, George Bernard Shaw’s comedy of disorder remains a complex, tangled work. “I don’t know what it is about,” he admitted while trying to reconcile its comic pastiche (“A Fantasia in the Russian Manner on English Themes”) with a broader social critique of “cultured, leisured Europe before the war” and the pessimism of apocalypse.

If the world has slipped its moorings, the privileged class that Shaw depicts is similarly adrift, blithely self-involved, cynical and apathetic. You see it handsomely conveyed in Alyson Cummins’s ship-shape set, compact and curved like a prow, where Mark Lambert’s eccentric Captain Shotover prowls his home with wide stance and low gait, forever battling a stormy swell.

There are any number of modes that director Róisin McBrinn’s lucid production can absorb here, from Edwardian comedy to Strindberg dreamscape, and she wraps everything within an arrestingly unreal style, closer to Lewis Carroll by way of Tim Burton than Chekhov.

As Ellie, the penurious young woman who intends to marry a pigeon-chested capitalist, Lisa Dwyer Hogg makes a charming unformed protagonist, an Alice in a Wonderland of tempters. Beneath a pillar of hair, Kathy Kiera Clarke plays her vampish confidant Hesione Hushabye, urging Ellie to follow her heart, but whose husband, the ladykiller Hector, immediately tramples it. Few actors are having as much fun here as Nick Dunning, as a pink-rinsed imp with a waxed moustache, but almost everyone is introduced by Philip Stewart’s twinkling piano motif and held radiant under Paul Keogan’s halcyon lights. It feels like a succession of showboats; a giddy visual feast for a conversely wordy play.

It’s as though such stylisation would make the play’s disputes more digestible – cynical capitalism, pragmatic gender politics, the cost of a human soul – as when the ensemble move around Ellie like mechanised devils, or Clarke and Dwyer Hogg bat a catatonic Don Wycherley (as the barking, brittle capitalist Mangan) between them like a crumpled marionette.

It is not an unfounded concern when even entertaining performances can make various characters seem no less superfluous, or a third act meanders through a dark night of disillusionment towards the gleeful nihilism of falling bombs: “We are useless, dangerous and ought to be abolished.” These lurches may be the consequences of a commendably odd staging; a necessarily fragmented response to war and individual detachment, written from a position of genuine heartbreak. Nothing matters after your heart is broken, reasons Ellie: “It is the end of happiness and the beginning of peace.” Without a radical edit, Shaw’s play will always seem unwieldy, yet that is the point: not to pick up the pieces, but to show them shattered. Until September 13

Under the Red White and Blue: Greil Marcus’s Gatsby marred by self-indulgence
8

The Booksellers: A brilliant browse through New York’s small bookshops
10