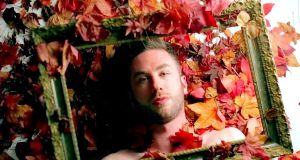 The Gloaming - Fáinleog  (Wanderer)
After winning the Choice Music Prize for their debut album last year, the contemporary trad supergroup The Gloaming, consisting of fiddlers Martin Hayes and Caoimhin Ó Raghallaigh, singer Iarla Ó Lionáird, pianist Thomas Bartlett and Chicago-born guitarist Dennis Cahill, reconvened in December to record a new album in Peter Gabriel's Real World Studios. Fáinleog (Wanderer), the album’s second track, is typical of the sprawling cross-genre magic that these players can conjure. Over seven minutes, the track moves from a spacious lilting fiddle and piano expression to incorporate Ó Lionáird's sean-nós style to a beatific climax. The Gloaming 2 will be released on February 26th and all of their Dublin live dates are sold out.

Katharine Philippa - Bieber
One of the most uniquely talented performers and musicians in Ireland, Belfast's Philippa creates experimental chamber pop music with piano, percussion and a voice that reaches the heavens. Her individual brilliance is evident on her mashup/cover of four Justin Bieber songs at once - What Do You Mean, Love Yourself, I’ll Show You and Sorry.

Jack O'Rourke - I'll Forget You In The Morning
The Cork singer-songwriter with the coarse yet wide-ranging voice is commanding on his new single which employs piano balladry and orchestral flourishes all while using the nursery rhyme “Ride a cock horse to Banbury Cross” in the lyrics. O'Rourke will release a debut album called Dreamcatcher later this year.

Wyvern Lingo - Letter To Willow
Buoyed by support slots with Hozier, the Bray three-piece have found their own audience already, but have yet to hit on a tune built to last beyond their audience. With each passing song, they get closer, as recent songs Subside and Used indicate. Newest track Letter To Willow, from a forthcoming EP of the same name, harks back to a 1990s pop/rock sound with vocals akin to the expressive power of the Dirty Projectors. The EP is out on March 4th and it's all leading up to a headline show in Dublin's The Button Factory on April 1st after gigs in the Roisin Dubh, Galway, on 11th March and Cypress Avenue, Cork on 26th March.

Heathers – November
Three years on from the twins Louise and Ellie MacNamara's second album, with some intervening  time spent writing songs for David Guetta and Disney, Heathers return with a tear-enducing tune about losing someone close to you.

ALBUM OF THE WEEK

The Natural History Museum - Attenborough
The Dublin electronic producer Dunk Murphy is a master of music textures transportive, heady and otherworldly. The debut album from Murphy's collaboration with singer-songwriter Carol Keogh is imbued with those characters, but unlike his work as Sunken Foal, which is primarily electronic and instrumental, the music on Attenborough has a more suitably, earthy feel. The use of arpeggiated synth notes and finger-plucked guitar styles give the music a rolling quality, while Keogh's lyrics and vocals add a focus to the sway and swish of it all.

NEW ARTIST OF THE WEEK

Hurdles
This recently-formed Belfast indie four-piece is made up of three lads from Northern Ireland (Niall Hanna, Eoin Bleeks and Thomas Bannon) and one from Bedford in England (Ross Haymes). The band recorded their debut EP as part of Oh Yeah Belfast's Scratch My Progress initiative in 2014, which gave them access to recording facilities at Start Together Studios along with industry advice. Early songs such as France and Control suggested a band following a Two Door Cinema Club mould. Newest track Dusk & Dawn has a mellow synth indie pop style not a million miles from their Northern Irish peers yet with hints of a developing sophistication. An EP of the same name is forthcoming.

The Golden Age review: A tough, intelligent story of displacement
9