Walk the Moon: how they shut up and danced their way to a global hit 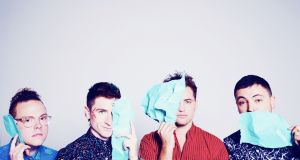 Patience is a virtue. Just ask Nicholas Petricca, the lead singer of Walk the Moon. His band’s name might not be that familiar, but if you have been near a radio or TV in the past 12 months, you will have heard their pop smash Shut Up and Dance.

The song went to No 1 in many countries. It has been used at weddings (and probably funerals), featured prominently in the Olympia Theatre’s pantomime and has even been covered by Irish country star Derek Ryan. Despite all that love, Petricca realised the song had “made it” in a less conventional manner.

“I think my favourite is stumbling in to a bar and hearing someone else do it on karaoke,” he laughs, speaking from Detroit as his band prepares to board an aircraft to Tokyo. “They had no idea I was there in the audience. That was pretty amazing.”

Shut Up and Dance could be any one-hit-wonder story: band forms, releases a smash hit and you never hear from them again. Instead of launching like a firework and fizzling out like a damp squib, however, Walk the Moon epitomise a slow-burn success that is rare in modern music.

Petricca formed what eventually became power-popsters Walk the Moon when at college in 2008, and they had released two albums before hitting it big with Shut Up and Dance, taken from their 2014 album Talking Is Hard. Still, there is no sense of indignation that success took this long to unfurl, he says.

“I feel like it’s constantly a mix of, ‘Wow, we’re living the dream and we’re out here every night making music and dancing with perfect strangers all over the world’ – and meanwhile, Justin Bieber has No 1, No 3 and No 4 in the top five,” he jokes. “We’re still just super-, super-small. I think the thing that’s given me some peace is knowing that, however huge someone else is, it doesn’t make me any smaller.”

The song itself came came together pretty quickly. “We were out in LA writing the last few songs for Talking Is Hard and had this great vibe for this one song. It didn’t have a title, it didn’t have a chorus but it had this feeling, like something amazing could happen. But we were just kind of stuck, so I went out that night and went dancing with some friends. We were at this club, and this girl was there with this backless dress and these beat-up red sneakers. I was kind of being an idiot, and she told me to shut up and dance with her, so I did, and then I went home and wrote that chorus. I came back to the studio the next day and we said, ‘This is it’. It all kind of came together in a flash.

“I think we knew that of all the songs on the record, it was maybe the most infectious. What really surprised me is how big it’s become. Like you said, it’s made its way into weddings, and little kids like it, and families like it. It’s become this sort of universal song, as opposed to just something that other kids my age listen to. So that’s really neat. It feels like we’re part of peoples’ lives, and that’s an amazing feeling.”

Walk the Moon’s story might have a happy ending, but it is not a one-off. Although it is true there are few bands who are afforded the time to develop without the pressure to produce a hit – and the industry is increasingly geared less towards albums and more towards disposable singles to generate cash – there have been some notable exceptions.

The Black Eyed Peas, for example, may have made themselves into one of the most ubiquitous pop bands of the noughties with songs such as I Gotta Feeling and My Humps, but it took them 11 years after forming to score their first big hit, Where Is the Love? in 2003.

And remember Gotye? Bet you thought that 2011’s Somebody That I Used to Know was his debut single, but nope: Wally de Becker had been releasing albums since 2003. He has not released an album since, mind you.

No formula for success

Nicholas Petricca is adamant that there is no formula, no pattern to that flash of magic that can alter the course of a career or a life. What matters, he says, is staying the course.

“More than anything, it puts a fire in our engine and really fuels us to beat ourselves, to best ourselves and to do it again. It’s intoxicating when something works; when something you’ve put so much time and energy and blood, sweat and tears in to; when it really resonates on such a scale. So of course we want to do it again, but we know as well as anyone else that there’s no formula for writing that sort of song.

“You never really know what’s going to hit, so we just have to keep making music that we love and with a message that we believe in. Our new song, Work This Body, is really all about being unafraid to chase your dreams and to go after what you really want. So in a way, it’s kind of the soundtrack to us trying to beat Shut Up and Dance.”

Hannah Lynch: ‘the most gifted woman Ireland ever produced’
10