Waiting for Arts Council to get its opera house in order 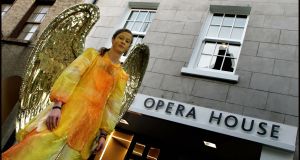 When will opera be blessed with a coherent strategy? At the opera house in Wexford. Photograph: David Sleator / The Irish Times

It doesn’t take much to figure out how strange the situation of opera in Ireland is at the moment. Just look at what’s announced for 2017. The Arts Council has already posted information about next year’s opera production awards. Irish Youth Opera and the Irish Chamber Orchestra will give the first Irish performances of Benjamin Britten’s Owen Wingrave, which was commissioned for television by the BBC and first broadcast in 1971.

The Irish Chamber Orchestra will also be involved with NI Opera in the Irish première of Handel’s Radamisto. And Landmark Productions, in tandem with Wide Open Opera, will present the first performances of Donnacha Dennehy’s The Second Violinist.

Opera Theatre Company has announced a production of Handel’s Acis and Galatea in collaboration with the Irish Baroque Orchestra under Peter Whelan. NI Opera will give the Irish première of Thomas Adès’s Powder Her Face and will partner with the Ulster Orchestra in concert performances of Puccini’s La bohème as part of the orchestra’s 50th anniversary celebrations.

Wexford Festival Opera, which will run from Thursday, October 19th, to Sunday, November 5th, presents Cherubini’s Medea, Foroni’s Margherita and Alfano’s Risurrezione. The festival’s expansion to 18 days from the current 12 will add two rather than six extra nights of opera. Medea will be presented four times, and Margherita and Risurrezione five times each. Wexford has not yet announced events for the mostly mid-week nights that will not feature one of the main operas.

The Arts Council is known to have moved the consideration of opera up its agenda, and the subject of opera provision in Ireland has become an active topic on social media and on the Letters to the Editor section of this newspaper.

The professional opera community in Ireland is small, and the nature of its lobbying is limited by fear of offending its funder, the Arts Council, and by divisions created by raw self interest.

So it was an interesting development when, last week, 11 leading singers signed a letter highlighting the fact that “there is no obvious avenue for Irish singers to work in their native country, and no regular supply of core opera repertoire in the capital”.

The first response was a letter asking “where has the paying audience gone?” and musing over “half-empty auditoriums”. Well, the Wexford Festival has been doing so well that it’s going to add extra performances. And back in the days of Opera Ireland, which bit the dust in 2010, full houses were also the order of the day in Dublin. The loss of Opera Ireland was also the loss of a marketing operation and a company well connected to its audience. Part of the current discussion is about rebuilding those services and resources that were lost six years ago.

Another letter juxtaposed the ongoing funding of opera with the loss of small grants to organisations in Co Clare. The management of the council’s small festivals and events scheme is, if anything, even more scandalous than the council’s handling of opera. But the Arts Council is in the business of funding high-cost art as well as low-cost art, just as the health service funds both low-cost and high-cost medical procedures. Arguments over the allocation of resources are unlikely to go away any time soon.

Wexford may well harbour ambitions of becoming the home of a national opera company. Don’t forget the Arts Council’s dreadful Shannon Plan, which raised that spectre in 2009, and Wexford’s newly revealed application for Arts Council funding for a spring season of non-rare opera involving Irish singers.

In truth, although the National Opera House serves so well for the festival it would be inadequate for that larger role. Oslo’s opera house opened in 2008 and the building, which is the home of the country’s national opera and ballet companies, accommodates a workforce of around 650. In a bigger company such as the Bavarian State Opera, the figure is around 1,000.

More recently, we had a letter that, among other issues, drew attention to the economic benefits of the Wexford Festival and estimated them at “more than €25 million”. On the same day the Guinness Cork Jazz Festival was quoted as generating €15 million for the local economy. Neither figure was attributed to a source let alone an actual study. Unless they are based on research that can be consulted, I tend to take such claims with a grain of salt. And I’ll take another grain of salt concerning any movement by the Arts Council to get its house in order on opera any time soon. The most likely scenario is one of kicking the can down the road yet again. Here’s hoping I’m wrong.