Thundercat takes a spiritual turn on his bass odyssey 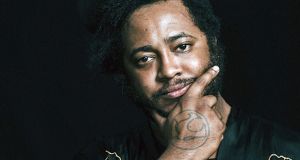 Stephen “Thundercat” Bruner: “Just because we have the internet, there is no God? That’s not how it really works. At the end of the day it’s not like were not going to die.” Photograph: Roger Kisby/Getty Images Portrait 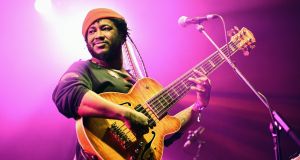 Thundercat at London’s OnBlackheath festival: “I’ve toured on the road for so many years. That’s the life that I actually know. It’s nice to come home and have a moment of chill, but I’m more so going than I am home.”

Conversations with Stephen Bruner, or Thundercat as he is better known, tend to mix the practical and the intangible. A bass player of supreme ability, whether in session or on his solo work, Bruner is also mischievous, hilarious company. He litters his talk with practical examples of songs and albums before slipping on to more ambitious planes – spirituality, artistry, ambition.

When we meet, it is several months before the release of Drunk, Thundercat’s third studio album. Bruner is at Montreal’s Red Bull Music Academy, a sort of annual hothousing of talented young musicians in which a select group live and make music together for several weeks. On the ground floor are daily lectures from producers and experts (Björk and Merrill “tUnE-yArDs” Garbus make an appearance in my three days there). Above, bedroom studios hum with activity 24 hours a day.

Bruner seems jazzed by the interactions and collaborations around him: “Here there’s an open door to collaborate, and I feel that people aren’t trying to take advantage of my name as an artist.”

Many of Bruner’s friends and collaborators now enjoy stellar success, from Flying Lotus and Kamasi Washington to Kendrick Lamar and Anderson Paak. In this lull before the release of Drunk, Bruner says he is “trying to stay open-minded, clear-headed and listen to music. It’s given me life a bit. People forget that that’s the essence of what we do . . . As time progressed, people stopped sharing stuff with me. I’m enjoying the [academy] right now – it reminds me of when I was younger.”

Thundercat’s youth is quite the story. Bruner grew up in South Central Los Angeles with a flautist mother and a drumming father. Dad had a prodigious career playing with such musical royalty as The Temptations, Gladys Knight and The Supremes before giving it all up for a quieter life.

Three of their children have been at the Grammys: Thundercat won for his single These Walls; keyboardist Jameel “Kintaro” Bruner was nominated for his band The Internet’s Ego Death; and drumming brother Ronald Jr won with the Stanley Clarke Band in 2011.

When Bruner was 15 he was in a boyband band called No Curfew, and a year later followed his brother into Suicidal Tendencies. He spent a long time hanging out in Silver Lake Studio with Sun Ra’s Shafiq Husain. The studio was a kind of hothouse for the LA music scene’s finest, and it was there that Erykah Badu recruited him for New Amerykah. After that came sessions with Flying Lotus, his solo work and meeting Kendrick Lamar.

Listen to these records collectively and you realise that Bruner is much more than just a player. He is essential to Lamar’s To Pimp a Butterfly; he had previously schooled Lamar on jazz, and the rest is modern musical history. He has an almost seamless connection with Flying Lotus. And he’s the bass-building powerhouse that gives so much of Kamasi Washington’s The Epic it’s swing and punch beneath those silvery, flowing saxophone lines.

Bruner’s is one of the most impressive CVs in modern music, but, perhaps because it is a few months before the release of Drunk, he seems more content talking about other people’s records rather than his own. He also seems cautious around the political burden being carried by the likes of Lamar.

“Even if you didn’t want to have anything to do with the politics, you have to. But even taking a step away from that, it’s very daunting,” he says. “I’m always on Twitter talking stupid shit, but that’s the reason I never talk about anything serious on Twitter. It’s a waste.”

Lamar is currently working on a new album, Bruner says. “I talk to him on a consistent basis and see where his mind is at. I always tend to find that with me and Kendrick when it comes to the writing process, we have fallen in sync a bit, where it’s almost like a singularity, where you talk about the same thing in a different form, bouncing ideas off each other in different ways.”

In a recent interview, with the New York Times, Lamar said: “We’re in a time where we exclude one major component out of this whole thing called life: God. Nobody speaks on it because it’s almost in conflict with what’s going on in the world when you talk about politics and government and the system.”

Bruner also sees spirituality as an essential component of his music. “People are so scared to have a bit of an opinion,” he says. “It causes you to connect to things that are bigger than you. You can’t deny it. You can’t put it on the back burner . . . It’s something that a lot of music and creativity can stem from. You can’t downplay those ideas just because they are not popular any more.

“Just because we have the internet, there is no God? That’s not how it really works. At the end of the day it’s not like were not going to die.” Bruner laughs at his own seriousness. “It’s not like there is this one guy that’s, like, 900.”

Spirituality is perhaps most clearly in evidence in Bruner’s work with Kamasi Washington and the stunning, sprawling masterwork that is The Epic.

“There is a bit of synchronicity that happens with the music that everyone can see that’s a bit bigger,” he says. “The fact that he would even put out an album so daring right now: that doesn’t represent something that’s based on a system. You can see it. It’s clearly from another place. Songs being nine to 10 minutes long? Everyone is scared to to do it.

“One of my favourite parts is Miss Understanding. The whole process with the choir and that it gets to this part and it feels like the beginning of a Flying Lotus album. It’s this crazy thing where, in this world, the process that got us to that one moment, and we’re kind of floating but all still playing – and then it feels like interstellar, this communication that’s happening.

“It’s all kind of out of time and everyone is still talking to each other; it sends chills up my back thinking about that. It sounds like a Flying Lotus moment, where a guy is controlling that kind of sound all by himself.”

Despite all this session work, Bruner insists he loves the road above all else. “I hate studios, I’ll be honest with you. People get weird in the studio. I’ve had some great and terrible times with people. People’s personalities come out in the worst way.” It’s hard to imagine such an open and generous individual, today looking industrially sharp in a one-piece green jumpsuit, getting easily frustrated in a studio.

“The process that happened between me and Kendrick was very organic, in a very real way. My apartment door was open to Kendrick whenever they wanted to come back and work on music for Kendrick and [producer] Sounwave. So there would be music that would start at my apartment and then we would bring it in to the studio.

“Personally it’s always because I’ve toured on the road for so many years. That’s the life that I actually know. It’s nice to come home and have a moment of chill, but I’m more so going than I am home.”

Bruner talks about getting home to his cat, named for one of the many sci-fi films he adores. “You pet your cat – ‘hey Tron’ – and don’t burst into flames as soon as you walk in the door, and maybe watch TV for sec and then leave again.” He again bursts into laughter. “That’s how it works.”