Three’s company for Yo La Tengo 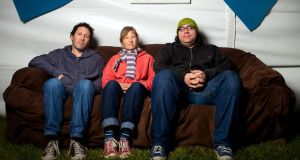 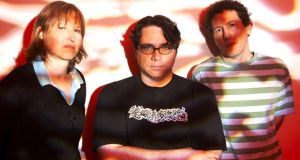 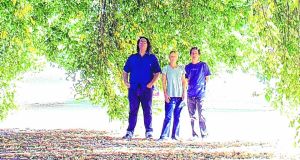 For too long, Yo La Tengo have been the unfortunate holders of a particular title in music. Being described as “the quintessential critics’ band” on repeat must get tedious, especially for a band coming up on 30 years of making music. The longevity of this career has many upsides, including an awareness of the market and what might be expected of them. In fact, when it came to making their 13th studio album Fade , Yo La Tengo decided to check whether their record label even wanted the songs in album form.

Ira Kaplan, speaking from a Swiss venue, while his bandmates soundcheck in the background, explains. “I’ve consumed music for such a long time, and have seen what’s happening with formats and distribution. So I asked the label if they wanted to put our music out as singles or downloads. If there was some other way of presenting our music, I wanted to be receptive to it, but I was pleased when they said they wanted an album.”

Kaplan formed an early version of the band in 1984, but the current line-up – which also features his wife Georgia Hubley and bassist James McNew – has been moulded over the last 20 years. Their close connection to the city of Hoboken, New Jersey, in the United States, where the band formed, has persisted (they still play several Hanukkah gigs every year at their local, Maxwell’s), but Fade was recorded in Chicago.

Instead of usual collaborator Roger Moutenot, the band teamed up with John McEntire at his Soma studio. McEntire, a renowned engineer and member of Tortoise and The Sea and Cake, was an obvious choice, but it came about randomly, despite a long-standing friendship.

“The idea came up, and we didn’t overexamine it. We didn’t finish Popular Songs with Roger and go ‘Oh never again’. We’ve often thought of working with someone else – I don’t know why we never thought of John.”

McEntire is also an excellent drummer, I point out. “We never have trouble finding people who play better than we do,” laughs Kaplan. “We like playing with other people, and John plays percussion on two tracks, but his loops and hands are all over this record.”

Tortoise guitarist Jeff Parker also contributed some string arrangements, and I wonder if there’s any sense of unease in such a tight-knit band when it comes to allowing others in. “We collaborate all the time, but it’s definitely another thing we’ve gotten more open to over the years. Even with the Hanukkah shows, it’s rare just the three of us would be on stage. Maybe there is some element of unease when we’re making a record . . . we’re not afraid of it but maybe we’re a little possessive,” says Kaplan.

Yo La Tengo records often feature walls of guitar, and pulsing tracks that unfurl and build into epics (such as the tracks that bookend I Am Not Afraid of You and I Will Beat Your Ass ). Listening to Fade, a much more low-key sound is evident. There are the usual melodic hairpins, but the songs are noticeably shorter. Kaplan admits some of the songs have elongated when the band play live, but the brevity on the record is deliberate.

“We wanted the record to be shorter, but no song was shortened after the fact. Even though we have odd ways of showing it sometimes, we do think about the length of the songs. When they’re long, we make a judgment that they’re better at that length.”

The band have never been lyrically or thematically abstract, but there is a definite sense of putting more of themselves out there on these songs. The bittersweet Is That Enough? or I’ll Be Around (sung by Kaplan) touch on personal issues and mortality, understandable given Kaplan’s brush with ill health in 2011.

“Sure, there’s that, but there is another aspect to writing lyrics that’s about not wanting to discuss a song’s meaning. It’s important to involve the listener but it’s bad for them to know too much about what a record is about. If a song is really that literal, it’s probably not going to be too interesting, and if it doesn’t incorporate other things, it’s not going to have a long shelf life.”

The trio write as a band, but disharmony is minimal, and they try to look at all the possible angles of each song. Their work ethic is concentrated and when it comes to making something new, they prefer to have an endpoint in mind.

“We are definitely deadline-orientated, but things that once seemed so preposterous to us don’t anymore. I remember thinking ‘Okay, I can see how Fleetwood Mac could spend $1 million making Tusk ’. If I were them and could deliver a record whenever I wanted, tinkering endlessly, yeah, I’d do that (laughs), but I’m happy we’re not in that situation.”

Fans of the band particularly love their cover versions, which are more than just cap-doffing acts of homage. Kaplan believes the way a musician learns music sticks with them. At several points in our interview he speaks about confidence, and how long it took the band to acquire it.

“Growing up, I remember listening to The Beatles and The Rolling Stones doing other people songs, or going to CBGB’s and watching Talking Heads doing I Can’t Control Myself . I enjoyed that as a listener, so it became part of my conception of what a band could be.”

And Simon and Garfunkel learned to sing harmonies by listening to the Everly Brothers.

“Yes, there is that too, and that lack of confidence I mentioned meant it was easier to imagine playing a guitar solo if it was someone else’s song.”

They’ve played Wheel of Fortune games on stage, and even read Seinfeld scripts to their audience. Can we expect more of that in Dublin?

Dying for an iPhone: Inside the factories that produce Apple’s bestselling product
9