The warpaint comes off for Jenny Lee Lindberg’s solo album

After 11 years with LA band Warpaint, Jenny Lee Lindberg felt compelled to make her own album – and it’s quite the dark, reflective affair 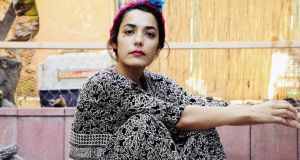 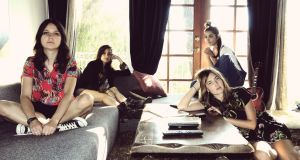 You might think everything has come easy for Warpaint bassist Jenny Lee Lindberg. Her rise from small-town girl to revered LA indie rock star seems to have been effortless. At 19 she first picked up a bass. Within a few years she was in Warpaint, a band feted by A-list stars such as the late Heath Ledger and former Red Hot Chili Peppers guitarist John Frusciante.

In the past 11 years she has helped to record two critically acclaimed albums, toured the world, married maverick video artist Chris Cunningham and inspired a host of adoring blogs. Her ascent might look as casual as her nonchalant stage presence, but behind the LA-isms lie a burning drive that has taken her all the way from Reno to become a bona-fide rock star and the first of the all-female group to release a solo album, the accomplished Right On!

On the telephone from London, where she is nearing the end of a short tour, Lindberg reflects on her pride in pushing herself to this point. Speaking in sentences that have as much to do with jet lag as a meticulous thought process, she tells of the perseverance needed, not just to overcome her deficiencies in production techniques but also the doggedness in not giving in to her own self-criticism as she prepared to lay herself bare with the first self-penned and self-sung songs of her 11-year career.

“I think I just got to a point where I was like: there’s more to life than this, than what I’m doing,” she says of the impetus to make the album.

“I’ve got more in me to give and I’m not doing it. I wanted to give more of myself. I want to express more. It just got to a point where I just couldn’t not do it.”

Lindberg was born in Hawaii in 1981 and raised in Reno, Nevada. Her parents are Sherry Sossamon, a nurse, and Todd Lindberg.

Her older sister is the actor Shannyn Sossamon, best known for her roles in A Knight’s Tale (2001) and 40 Days and 40 Nights (2002). Sossamon left for LA in 1995, where their father had moved following her parents’ divorce in 1984. Within months she was picking up TV adverts and modelling gigs, so it was no surprise when Jenny Lee followed her four years later.

“I definitely wanted to leave Reno at a very early age,” Lindberg says. “I was excited to see something different. I kind of outgrew my hometown at a very young age. There wasn’t a whole lot to do and I didn’t really know what I wanted to do when I was there. I just knew that I wanted to go and see the world.”

In a way Lindberg has returned to Reno with her album. Where Warpaint’s languid and textured psychedelia owes some debt to Los Angeles, the sound of Lindberg’s formative years is peppered throughout her debut album.

You can hear the steady influence of 1980s new wave and goth that made Lindberg’s life in Reno a little more bearable in the dreamy Cure-like guitar work of Never, right through to the high-fretted bass lines of Boom Boom, which bring to mind Joy Division.

“There’s definitely a little bit of everything in this record,” she says. “Each phase of my life is there. The record feels very nostalgic to me. I can really see 13-year-old Jenny or 15-year-old Jenny there. Because it’s my first time doing a solo record, I’ve got a pool of inspiration and experiences to pull from. A lot of the songs weren’t pulled from the present. Instead I was sort of tapping in to lots of old things in my past.”

If the influence of her formative years is palpable in the musical textures of the album, Lindberg is a little more aloof on the lyrical content, insisting that much of the record was written in a stream of consciousness.

“When I write I’m not really thinking about things. I’m just letting it happen. Whatever comes out is coming out. You might not know what you’re pulling from in the moment, but you’re not censoring it. You’re just letting it happen. Then afterwards you realise, ‘Oh that’s interesting that I wrote about that. Like what does that mean for me? When have I felt that?’ There’s times when I’m writing something and it just comes out, and I don’t really relate to it until after it’s written.”

Most of what has come out, I suggest, is quite self-critical and dark. There are references to social anxiety, bullying and the darker side of relationships. “I think that there’s a little message in every song,” Lindberg says, adding that she’s not always singing about herself. “You know, Bully is about not being pushed around; Boom Boom about finding your own rhythm and being yourself; Never about never doing anything that compromises your integrity; Long Lonely Winter, you know, the bridge is about not seeing such an ugly reflection of yourself.”

It’s in some of these songs that Lindberg has shown a more intimate reflection of herself than the cool and confident bassist the public perceives.

Lindberg will tour Right On! into the early part of next year before recording Warpaint’s hotly anticipated third album, which she describes as “bigger-sounding”. As for a second solo album, Lindberg’s response is as enthusiastic as her debut album’s title. “Now that I’ve proven to myself that I can do it and that I can make it happen, I’ll definitely do it again. It’s been too much fun not to keep doing it.”

Winter Papers 6: There’s nothing here that doesn’t earn its keep
9