The Tallest Man on Earth's tales of earthly riches

Kristian Matsson, aka The Tallest Man on Earth, talks about self-doubt, his love of Irish crowds and dealing with the constant comparisons to Bob Dylan and Bon Iver 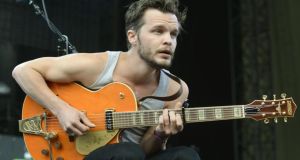 Kristian Matsson doesn’t really like doing interviews. You can tell from his voice, as the musician known as The Tallest Man on earth speaks down a crackling phone line from a train that’s hurtling through the Swedish countryside at 100 miles an hour. You can also tell that he’s trying; even when the line cuts out four times during our conversation (presumably because of tunnels), no diva strops are thrown.

His down-to-Earth nature has ensured that Matsson has never gone out of his way to sell himself or his music. The showbiz aspect of the music industry has never appealed to him; he says his neighbours in Dalarna, the rural Swedish countryside where he grew up and still lives, are aware of his profession but aren’t bothered by it.

“I don’t do a lot of press. I have this thing where I usually don’t know what to say,” he explains. There’s an American twang to his accent in English. “I’m doing this interview because I’m coming to Dublin to play soon, but I have no interest in showing off my face for no reason. I just want to write really good songs and play them really well, and I don’t think I’d have the energy to do that if I have to do a lot of other stuff like going out to parties and stuff. When I’m at home, I fish and I’m by the river and I can just relax for a while and have fun. And I need that, to stay under the radar and do what I want to do. I’m happy with what I have right now.”

Matsson may be content now, but life wasn’t always so balanced. His third album, There’s No Leaving Now, released last year, showcased the vulnerable side of his personality, with songs about standing firm and facing your personal demons.

“Doubt, always doubt,” he says. “A lot of songs on the last album are about that. I’m really grateful for where I am and what I get to do, but it has been really hard, at points, just being by myself.

“Now, I’ve started to really try to soak in the stuff that I love. “Before, I just did the shows and straightaway I wanted to look at doing an album again. But now, if it’s a long day with a lot of travel, I can look forward to a show because that’s the best part of the day.”

Several things helped bring about this change of mindset. Firstly, he met his wife, Amanda Bergman (herself a musician). “I was lucky in that I met this woman, and she wanted to spend mornings with me, when I’m a monosyllabic idiot,” he laughs. “But that can be hard too, because you start to look at yourself even more. But having someone at home really does make a difference, yeah.”

Secondly, turning 30 earlier this year didn’t have any momentous effect on Matsson, but he did come to some realisations about career longevity. “I felt that I want to do this for a long time, and I can’t do it if I’m writing songs about running away. There will always be days that it feels dark, and there’s some really dark songs coming up on future releases, but that’s OK. And this might sound boring and not very rock’n’roll, but I wanted to take care of my body. You have to be in good physical shape to be in good mental shape, so I’ve started to do that: eat better, drink less, all of that. I’m not going to become Sting or anything like that,” he chuckles, “but I’ve learned to look after myself.”

Thirdly, he received some valuable advice from a former touring partner. The Tallest Man on Earth and Bon Iver shared a bill back in 2008 and Matsson and Justin Vernon struck up a friendship. Vernon’s Bon Iver is one of two singers with the initial ‘B’ that Matsson gets compared to: he is, however, “tired of answering questions about the Bob Dylan thing”.

“I don’t blame anyone; I have a nasal, high- pitched voice and I sing by myself,” he laughs. “But being compared to Bon Iver is just beautiful. I love Justin so much, and he’s my biggest inspiration, so I’m flattered if people compare me to him. And of course I’m going to steal stuff from Justin – I stole the tuning from Perth and used it for Revelation Blues, for example - but I don’t think he’ll be angry.

“He was a big part of me getting to where I am today, because I was on tour with him and was getting sick and tired of music industry people. But he showed me that I could do this and just stay a good guy and do stuff for the love of music. That connected with me on a lot of levels.”

It may be a wrench to leave his idyllic homestead in Sweden, but Matsson is an in-demand live performer around the world. His last few Irish shows, in particular, have been gigs to remember.

“I’ve played Whelan’s twice and Vicar Street twice; there’s just something about Ireland,” he enthuses. “You guys are rowdy and you talk a lot, but it’s not like other people are rowdy: you’re there, and you’re with me, and it’s such a great experience. I remember just laughing out loud on stage at the last Vicar Street show just because of how crazy it was. There’s no barriers, in a way, like there can be in other cities where people have to keep their cool. It’s not like it’s a drunk idiot crowd, either – the people are just alive. And trust me, I don’t say this about everybody, but there’s something about Irish people. It’s easy for you to show emotion.”

If it was any other musician, you’d probably consider such a statement a crowd-pleasing cliché, but Matsson seems genuinely grateful for having the good fortune to lug a guitar case around the world and stand on a stage in his trademark vest to entertain people.

“I am grateful!” he confirms. “It sounds boring, but I want to keep doing this for the next while – that would be a good life, in my book. I think the next album is gonna be the best one so far. There’s so many other things in life that are a struggle, but you get up on stage and dance around and you don’t fall down, so you keep going. I haven’t fallen down yet.”

The Tallest Man on Earth plays the Iveagh Gardens in Dublin tonight.

There are plenty of sombre films about. Should we be surprised?
8