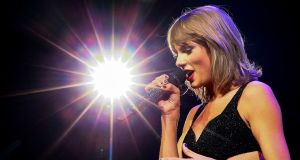 Everything has changed: Taylor Swift’s back catalogue has reappeared on streaming services.

Subscribers to Spotify, Google Play and Amazon Music can now stream the artist’s entire library, including her most recent album 1989, in an abrupt about-turn from her previous stance against free streaming services.

The move ostensibly celebrates a twin milestone for Swift: her 10 millionth sale of 1989, and her certification from the RIAA for selling 100 million songs. That’s what her social media accounts would have you believe, anyway:

NO TAYLOR YOU ARE NOT ABOUT TO DO THIS TO KATY YOU 🐍 🐍 https://t.co/jLSQnZDjft

Fans have noted another potential reason, though. Swift’s rival Katy Perry (subject of the song Bad Blood, sample lyric: “Still got scars in my back from your knives”) has her new album coming out on Friday. How better to spoil the launch than clogging up most-played charts with tracks from a decade’s worth of albums released at the stroke of midnight?

Taylor Swift first pulled her back catalogue from streaming services in 2014, ahead of the release of 1989. The move was made as part of a broad attack on free streaming services, with Swift writing in an opinion column for the Wall Street Journal that “music is changing so quickly, and the landscape of the music industry itself is changing so quickly, that everything new, like Spotify, all feels to me a bit like a grand experiment. I’m not willing to contribute my life’s work to an experiment that I don’t feel fairly compensates the writers, producers, artists and creators of this music.”

She also took Apple to task for its decision to not pay artists for streams from users on Apple Music’s free three month trial. That attack ultimately worked, convincing Apple to pay royalties after all, and led to a strong partnership between the two: 1989 appeared on Apple Music from its launch, and Swift has appeared in adverts for the service to boot.

The move also comes following an about-turn from Spotify: the company finally caved to the record industry’s demands to allow limiting new albums to paid-for subscribers only. Its previous insistence on identical terms for free and paid subscribers had earned it the brunt of Swift’s ire, with the artist pulling not just her newest album from the service, but her entire back catalogue.

In a statement celebrating the presence of 1989 on its service, Amazon Music chief Steve Boom said: “We love Taylor and we’re happy to have 1989 now on Amazon Music for all fans to stream and enjoy.” – (Guardian Service)