Sylvan Esso: Amelia Meath on life on the road

Amelia Meath ditched hipster Brooklyn to move to Durham, which is just one of the things that have helped her musical project with Nick Sanborn to thrive 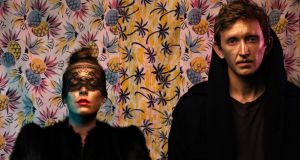 She answers the phone with a chirpy giggle that is far too upbeat for someone stuck in the back of a cramped touring van - but trundling down a dreary US highway on the way to Burlington, Vermont, Amelia Meath’s cheerful, laidback demeanour seems instinctive. Besides, she explains, the van is a recent upgrade for her and her bandmate Nick Sanborn. “We’ve just recently expanded to having a tour manager, but before that, it was just us in a Prius,” she says laughing. “Hauling our gear and merch for the load-in at gigs only took two trips. It’s so simple.”

Meath and Sanborn have become accustomed to travelling light, both physically and musically speaking, in recent times. Although their names may be familiar to fans of indie-folk a capella trio Mountain Man (Meath) and psych-folk-rock band Megafaun (Sanborn), their newest collaborative venture Sylvan Esso streamlines their sound into something that is a departure for both, and a new twist on minimalist synth-pop.

The seeds for the duo (their name is taken from the Swords and Sorcery video game) were initially sown four years ago, when the pair crossed paths at a gig at The Cactus Club in Milwaukee. Meath was on the bill with Mountain Man; they were supported by Sanborn under his glitchy electronica solo guise Made of Oak and both musicians were immediately drawn to each other by their “terrible dance moves”, as Meath puts it.

“I asked him to make a Mountain Man remix, and then he actually did a good job - which is very rare with remixes, particularly people that you don’t know that well,” she explains. “Nick and I were Internet friends, but we weren’t actually really ‘friends’ yet. So the fact that he even did it, first and foremost, and then the fact that it was good - it made it obvious that there was more to explore.”

The pair stayed in touch online, but Meath’s commitment to touring as part of Leslie Feist’s band put the kibosh on anything developing anytime soon. Nonetheless, they continued to trade ideas back and forth via email, and quickly realised that their sketches were starting to sound like songs. Meath took a further leap of faith when she moved to Durham, North Carolina - where Sanborn was based with Megafaun - to further pursue the band’s tentative beginnings.

“I was on the road with Feist, but luckily we were right at the end and I only had two more months of touring with her when Nick and I started making music together. I knew that Mountain Man was going to take a big long nap after the Feist tour, and then I quickly realised that I didn’t need to be living in Brooklyn. Nick was just moving to Durham, so I thought, Well, I’ll go, too! I like the people there, my bandmate’s there, so I’ll do it. The more that I tell people that I did that, the more bold it seems to me, now. But when I was initially doing it, it seemed like a no-brainer.”

Living in Durham rather than hipster Mecca Brooklyn has served the band well, she explains; the city, although small, has a thriving music scene with respected indie Merge Records being headquartered there, along with bands like the aforementioned Megafaun, Superchunk, Hiss Golden Messenger, Mount Mariah and more. Still, when you play the sort of idiosyncratic synth-pop that Sylvan Esso practice, you’re bound to stand out anywhere.

“I’d always want to write a pop song, but that always seemed like way too much fun to me,” Meath says, chuckling. “Not that writing folk songs wasn’t fun, but writing pop songs felt like ‘I really can’t do that, because that’s just fluff… and well, you can’t do dessert all the time’. But then I decided that I could.”

The songs on their eponymous debut, released in May, take influence from their previous musical incarnations; Sanborn, who also acts as producer, composes the electronic beats, while Meath’s hypnotic vocal melodies takes the songs into unexpected places, her a capella work with Mountain Man patently colouring the cadences of her voice. Songs like Hey Mami, H.S.K. and Could I Be are all undeniably infused with a deep, rhythmic groove.

“Quite honestly, I think that comes from the fact that I don’t play any instruments - so when I do write songs, I write them in the air, or I write them in relation to the beats that Nick is making,” Meath explains. “I also just like to write things that can stand alone by themselves. But most of the songs start off with me wandering around and getting very frustrated by trying to figure out a vocal line to sing on its lonesome.”

The tradition of duos in pop music is a longstanding one, but Sylvan Esso was never forged with the idea of continuing that custom.

“If there was a third party who was as vocal or as excited, or who as involved in some sort of way, I’m sure we’d be a threesome - but all the ideas were coming from Nick and I,” says Meath. “And it’s really easy to work as a duo, because you don’t have to diplomatic about anything, really. It’s so easy to be collaborative in this way and there’s less compromise. If we ever write a record that requires more instrumentation, or anything like that, I’m sure we’ll definitely think about [adding a third member] – but at the moment, it’s so simple. It’s soooo easy.”

The Sylvan Esso bandwagon continues apace, but fans of their other bands would be forgiven for being concerned, especially those who were particularly enamoured with Mountain Man’s excellent 2010 debut, ‘Made the Harbor’. Meath is non-committal about the future - at least for now.

“I mean, at the moment this is our main focus,” she says. “I’m sure eventually, something will happen with Mountain Man. At the moment, Molly [Sarle] and and Alexandra [Sauser-Monnig] are so happy doing whatever they want to do, and so am I. So eventually, when someone writes more Mountain Man songs, it will just happen naturally. But I’m pretty happy just letting it hang out there and not poking it too much.”

Nor is she concerned with Sylvan Esso bringing their largely upbeat, sunny-side-up synthpop - which was described by many reviewers as the ‘soundtrack to summer’ upon its release - to places like deepest, darkest Dublin in the murky depths of autumn.

“I love the idea of us doing an album over the summer, but now it’s September - so I’m like ‘Oh no! Are people going to stop listening to it completely?!’,” she says, giggling. “But we’re very excited to play. What should the audience bring with them? They should bring handclaps, I suppose… or a sense of rhythm. Or maybe a lack of rhythm, it doesn’t really matter. And a couple of jumps, and a few skips. We’ll have fun. We promise.”

Out of the wasteland: the first World War and modernism
2

Rob Delaney: Could I feel what they were doing when I had my vasectomy? Yes
4

Want to get a video message from your favourite celebrity?
Real news has value SUBSCRIBE