Stage fright: the monster that scuppers the tour

Adele has it bad. So does Barbra Streisand. And Kate Bush got help with hers to enable her to get back on stage after 35 years 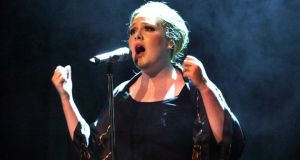 The adrenaline that courses through a performer’s body before they take to the stage in front of thousands of expectant fans would be enough to kill some people stone dead. A normal resting heart rate is 60 to 80 beats a minute; Kiss guitarist Paul Stanley once had a heart rate of 190-plus a minute before performing a show.

Seasoned performers develop a tolerance for the surges that soar through their body but for some the hyper-accelerated physiological changes coupled with the terror of performance lead to “stage fright” – a genteel term that doesn’t do justice to the agonising multiple panic attacks that can cripple people physically as well as psychologically.

“I puke quite a lot before going on stage,” says Adele of her chronic stage fright. It’s so bad that that she once tried to leg it out through a venue’s fire exit instead of taking those last few horrible steps onto the stage. Robbie Williams – who once cancelled a whole tour because of stage fright – used to resort to medication before he learned that a series of yoga-style “belly breathing” exercises worked better.

Carly Simon, who seldom performs live, gets so distraught that she gets her band to spank her just to take her mind off the ordeal to come. Others stick sharp sticks into the palms of their hands; still others have a word with Mr Jack Daniel.

There are financial considerations here. Adele is losing out on millions of euros a year because her anxiety attacks prevent her from playing big festivals. She explains that she’s afraid that if she tried it “my heart would race so fast it would explode out of my chest”. Her stage fright is so bad she can’t even manage an indoor tour.

Technically known as “pre-competitive performance anxiety”, the condition is the scourge of the performing arts. Laurence Olivier memorably referred to stage fright as “an animal, a monster which hides in its foul corner without revealing itself but you know that it is there and that it may come forward at any moment”.

Daniel Day-Lewis can’t appear in theatre because of a stage fright-induced breakdown he experienced when performing Hamlet back in 1989. It was so bad he had to be literally dragged off the stage.

When stage fright strikes, it sticks. Barbra Streisand also suffers from the condition. It first struck her during a 1967 open-air concert at New York’s Central Park. It was during the Arab-Israeli Six-Day War and Streisand suddenly felt that, as a Jewish person, she was a potential target. “I was afraid somebody might take a shot at me. So I started walking around the stage fast. And I forgot my words, which is a nightmare. And that frightened me, that absolute lack of control,” she said. A similar thing happened to Duran Duran’s Simon Le Bon after he hit the mother of all bum notes during Live Aid. It took him years to recover.

Three years ago Kate Bush admitted she got “absolutely petrified” even thinking about performing live and said she had nightmares in which she was onstage and didn’t know what she was doing. The word is the “talking cure” – counselling – got her over her 35-year-old terror. That and belly-breathing.

MIXED BAG
Like: The brilliant When Bjork Met David Attenborough , out on DVD