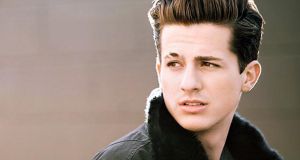 Gettin it on: Charlie Puth

BLUR
Go Out (4/5)
Parlophone
Blur announced their long- awaited reunion album on the first day of the Chinese new year last week, from a Chinese restaurant in London’s Chinatown. This comeback single was released to the internet via a Mandarin language lyric video. The album is called The Magic Whip, which is what the Chinese authorities use for “re-educating” political dissidents. Well, possibly.


CHARLIE PUTH ft. MEGHAN TRAINOR
Marvin Gaye (1/5)
Atlantic
“Let’s Marvin Gaye and get it on / You’ve got that healing that I want / You’ve got to give it up to me / I’m screaming mercy, mercy me . . .” Okay, we get it. Clearly, this kid is just shoehorning as many Marvin Gaye references as he possibly can into proceedings. That’s what’s goin’ on here. Truly, this gimmick is so lame, it makes me wanna holler.


GIRL BAND
Why They Hide Their Bodies Under My Garage (4/5)
Rough Trade
Imagine Fred West had been framed, that he played a fearsome rock guitar, drenched in layers of unforgiving feedback and possessed a demented yelp that could punch holes in the polar icecaps. Then this ferocious Blawan cover, recorded by Dublin garage rockers Girl Band, is roughly what he’d be cackling as he settled down for a night in the cells. Should do well on daytime radio, in other words.


ACTION BRONSON
Terry (4/5)
Atlantic
Aged 31 years, and carrying about as many stone in weight, Queens rapper Arian Asllani releases his major label debut album Mr Wonderful next month. The Jewish-Albanian MC doesn’t just anticipate a major commercial breakthrough, by the sound of this latest track – which tells of mink coats, penthouse suits, private jets and renting a skybox at Madison Square Garden to watch Billy Joel (!?). He’s already gorging on the fruits of that as yet attained success. Call him the Conor McGregor of hip-hop, if you will.