As Placebo hit the road for their 20th-anniversary tour, Brian Molko traces the origins, the enduring appeal and the final destination of the band 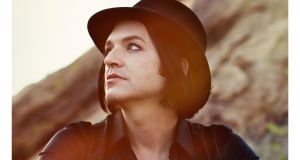 Brian Molko: "That time feels like a parallel universe. I picture it in my mind as a scratchy VHS tape; all grainy."

Placebo first burst on to the world stage in June 1996, when their self-titled debut introduced the world to their distortion-heavy sound, ambiguous lyrics and the striking, androgynous aesthetic of frontman Brian Molko. With that release, Placebo set off on a trajectory that saw the band sell 11 million records over the next two decades and build up a loyal fan base now eager to catch their first major tour in years.

Molko’s distinctive nasal drawl, skinny leathers and black fingernails made him an alt-idol when it was a lot harder to court chart success singing about bisexuality and ketamine. As the band take on a world tour in support of their retrospective compilation A Place For Us To Dream, he spoke about the history of the group, how songs age, and details of the tour itself, which begins with a solemn tribute to Leonard Cohen, whose death is still very much fresh in the singer’s mind.

“I discovered his music when I was 13 and I think I burst out crying the first time I heard it. His songwriting is so economical. It’s amazing how much he conveyed, so much with so little. It always blows my mind”.

In the case of another high profile casualty of 2016, the pain was even more pronounced. “Well, Bowie’s death was devastating, but I think he went out with such style and panache with Blackstar; his life was a work of art and his departure was a work of art. It took me a while but I’ve managed to take peace from that”.

Placebo had first-hand experience with David Bowie, who approached them to collaborate on their second album. “He called me up out of the blue and was like ‘Brian I really like that song, [the album’s title track, Without You I’m Nothing] I’ve written my own harmony part and I’d like to record it with you’. That’s what David did; when he got an idea, he wouldn’t get someone to call you up, he would call you directly.

“A few months later, we flew to New York and were in the studio with David and Tony Visconti. David was really happy in this period and we became quite close. He was clean, happy, comfortable in his own skin, and undergoing a creative renaissance. It was a fantastic period to glean knowledge by osmosis from him. I’m eternally grateful for it”.

Parallel universe
With the tour itself, does it feel weird to be gazing back at two decades of their own hits?

“If I look back, it doesn’t really feel like 20 years,” he says, his transatlantic lilt rolling from home counties to the Hamptons in alternating sentences.

“That time feels like a parallel universe. I picture it in my mind as a scratchy VHS tape; all grainy. Obviously, I feel like a completely different person than I was then. I also try my best to live in the moment; I don’t have a tendency to look back all that much. Plus, myself and Stefan have been doing this for the entirety of our adult lives, it’s just what we do. We started writing songs together in 1994, so that’s 22 years now.”

Asked how they go about staging a tour, considering they have so much history to choose from, Molko says the show is like “a greatest hits of our live performances, in a way, rather than just the tracks on the record. We play lots of stuff that isn’t on the record, because they work out so well live, and it would be an injustice to the fans because they get such a great live reaction” – adding with an affected radio ad voice and self-deprecating cheesiness – “everywhere from Moscow to Manchester. That’s a good line you can use”.

Dublin debut
Plucked by a major label off the back of a couple of independent releases, Placebo were shuttled on to serious label stardom to record their first album in Dublin, which wasn’t Molko’s first choice. “I wanted to go to Amsterdam,” he says, laughing, “but the managers wouldn’t let us, so we were sent to Dublin instead – and that’s a really happy memory for us. But we were so naive and green, it was a very innocent time.

“We’d released a few singles on our own, but the whole thing with the first record was to capture us as we sounded live. We were a power trio and that’s all that we knew. By the time we got to the second album, we’d grown weary of that already. We wanted to explore the possibilities of what we could do with an album, in terms of light and shade, other instrumentation, more complex arrangements and textures. So that’s when our sound started to expand. Our first album is very much a document of a very young band.”

This somewhat ambivalent relationship with their past work has led the band to be quite open about their weariness with a number of their more popular hits, some of which they claim they can’t stand to play anymore.

“Sometimes, there are old songs that you just can’t connect with for a while. For us, walking onstage and performing a song you don’t believe in – just to make other people happy – that’s a mistruth. We don’t want to be a mechanical act on stage. We need to find some form of connection, whether that’s an emotional connection or a sonic connection.

“Sometimes, to play these songs, which are often important and significant within our discography, we have to literally rewrite them, we do covers of our own songs. Teenage Angst, for example, has at least four versions”.

Already committed
With the retrospective and the tour very much harking back to old material, would the band commit to going back and playing those old hits?

"Well, we had already committed,” he says, laughing, “before we’d even started rehearsals, we said in the press that we were going to play Pure Morning and Nancy Boy, two songs we hadn’t played in over 10 years, and which, incidentally, we’d also sworn never to play again. But we are playing those and we’re enjoying it”.

Never having had a multi-platinum selling single to get tired of decades later, I ask if rediscovering the joy in an old song is like when I flick through old photographs of myself and realise I wasn’t every inch the gnarled, carnival grotesque as I had imagined at the time.

“Yeah, I literally felt that way about Pure Morning. I did a radio interview recently and they asked me what song I wanted to hear. It occurred to me that I hadn’t heard Pure Morning in 10 years so I chose it. So I heard it for the first time in so long and was actually surprised by how modern it sounded, that it hadn’t dated. That was a really pleasant surprise.”

“Having said that,” he says before we part ways, perhaps fearing he’s lulled the public into a false sense of complacency, “there’s no guarantee we’ll ever play those songs again after this tour. So, Placebo fans, be warned: if you want to hear those songs live, possibly for the last time, you have to actually come to the shows.”

Cillian Murphy: ‘To think you can hold Ireland to ransom. You can’t’
3

Charlize Theron: Harvey Weinstein said Renée Zellweger and I slept with him to get jobs
10