Pimp my piano: a technician lifts the lid 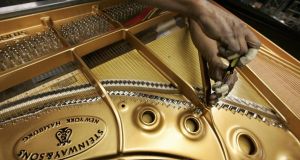 The website and printed material for the new Dublin International Piano Festival & Summer Academy are emblazoned with a night-time image of the Convention Centre Dublin and the Samuel Beckett Bridge. The bridge’s harp-like cable stays have been cleverly integrated into the festival’s logo, where they represent the frame and strings of a grand piano.

And it was with an exposition of the nuts and bolts of the piano that the festival opened at the Piano Academy of Ireland in Rathgar on Thursday.

The speaker was piano technician Martin Walsh, a man you might have seen at work if you are a regular concert-goer, and someone whose work you are almost sure to have enjoyed, even if you have never even heard of him.

He is what you might call a piano nerd, someone for whom the minutest scrap of information about pianos can be of vital interest. You may think of him as a piano tuner, but that is only one aspect of what he does. If he were just a tuner, he wouldn’t have begun his exposition with the piano partly dismantled, and the keyboard and all its associated mechanics – collectively known as the action – ready to slide in and out. To use one of his own phrases, he is expert at what he called “pimping a piano”.

He has worked on a production line for pianos, at the end of the process where the instruments get a final tuning and checkover. His advice – and bear in mind that he was addressing an audience mainly of aspiring professional pianists – was not to buy a production line piano, but to go for a handcrafted model, even though he gauged the price difference for apparently similar models as a factor of three.

The handcrafted product, he said, would not only sound better, but give less trouble, and last longer.

He fielded questions about the merits of Hamburg-manufactured Steinways over New York-manufactured ones (he is fully on the Hamburg side, as most Europeans are), offered advice about whether to play with the lid up or down (up, up, up, was his advice, saying you will wear a piano out early by playing it with the lid down, because the muffling will cause you to use more force to compensate), explained why it is okay to use a hot iron to treat the hammers (the shape and texture of the hammers are crucial to the tone), and went into the minutiae of the way temperature and humidity affect not just the stability of pianos, but also the nature of the sound they produce.

If you are serious enough about pianos to follow his advice, you will have a thermometer and hygrometer recording the factors affecting the inner life of your instrument, if not a machine to condition the air in your room so your piano can have the right atmosphere in which to sound its best.

And he had advice for anyone trying out a piano before they buy it. Don’t be impressed by the bass end, or the highest treble. These, he said, can be adjusted. It’s the mid-treble, the area where the right hand does most of its work, that’s crucial. If that is not right, there is not much that can be done to fix it. If it is good, the rest can be adjusted to put the whole in balance. Of course, you would probably know a thing or two about pianos to make that mid-treble judgment call in the first place.

The festival’s recitals and masterclasses continue at the National Concert Hall until Friday.

One of the earliest messages that came from the first New Music Dublin Festival was that it wouldn’t be repeating the style of the Living Music Festival, which had become an event with a single-composer focus.

The LMF fell victim to RTÉ budget cuts and ended in 2008. By that stage, however, it had effectively painted itself into a corner. After Steve Reich, John Adams and Arvo Pärt, it looked like Philip Glass would be the only composer with the same level of name recognition, and it was hard to see how the festival could proceed on its chosen track after that.

The first New Music Dublin Festival had all the appearance of being an event designed by committee, which is exactly what it was, with RTÉ, the National Concert Hall and the Contemporary Music Centre (through Séamus Crimmins, Simon Taylor and Evonne Ferguson) having collective responsibility for the final programme.

The appointment of an artistic director for 2014 is an obvious solution to the mix of vested interests that held sway in 2013. But those interests were already at work before Dennehy was appointed.

The only hard information in the public arena about anything in the 2014 programme is that on Friday, March 7th, the RTÉ NSO will give a lunchtime performance of Harrison Birtwistle’s Earth Dances under David Atherton, with Birtwistle in attendance – the composer is due in Dublin as the keynote speaker for a Composition in the 21st Century conference organised by the Music Composition Centre at TCD (March 5-7th).

It’s bizarre to have tied the hands of an incoming artistic director by programming a work that uses the most expensive performing group the festival will have at its disposal. And it seems like a bad omen, too, given the lack of focus there was in last March’s programme.

The key, of course, will be the brief that Dennehy has been given in his new role, and the breadth of taste he will show in programming the work of mainstream European composers, who have been largely neglected in favour of Americans in his work with the Crash Ensemble.

It’s not a good omen either that none of this information is yet on the festival website. In fact, not even the 2014 festival dates are there (March 7-9th), though they are on the Music Composition Centre website. Who’s minding the store?

My Dark Vanessa: A sharp debut that will cause a stir
10