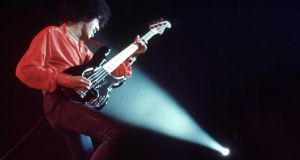 My preteen experience with music in Canada was limited to a (pretty deadly) stack of vinyls owned by my dad and a series of petrol-pump loyalty-point mixtape cassettes from the local gas station.

I thought I might be in love with Billy Joel and Elton John, but in hindsight they were kid crushes. I firmly believe that my first flustered glimpse of Phil Lynott – sex on legs, and in leather trousers – catapulted me into puberty, and this was a turning point in my relatively sheltered little life.

The horrors of middle school were survived only with the welcome dirt-ball disruption of rock’n’roll: it was the thing I didn’t know I was looking for, the thing that gave my nerdy young self an escape, an identity, and became my one true love.

But I wasn’t just in love with Phil Lynott. I wanted to be him, and a series of somewhat bizarre and ill-advised Thin Lizzy-inspired life decisions followed.

I bought the very first Rickenbacker 4001 bass that I laid my eyes on, and it is still my absolute favourite guitar. (Good.)

I named my hamster (Phil) after Phil. (Good.)

I quit playing the harp and dedicated my life to the bass. (Obviously good, except moneywise, which was a disaster.)

I based my first real band (The Fangs) on Thin Lizzy, from clothes to photo shoots to drinks. I think I only drank whiskey for the years that I played with them. (Good fun/sad liver.)

I moved to Ireland, my rock Mecca. (No, really.) My then boyfriend – John “JC” Calabrese, from the band Danko Jones, who are all huge Lizzy fans – was somehow involved in setting up a Thin Lizzy festival in Toronto around 1999, with all money going to the Roisín Dubh Trust and its proposed statue of Phil. The festival went on for years, and somewhere along the way I picked up my Rickenbacker and a little bag of clothes and legged it to Ireland. I thought about it for five minutes – and it remains one of the best decisions of my life.