No sign of ‘Lenny’ fatigue as Cohen returns to Dublin 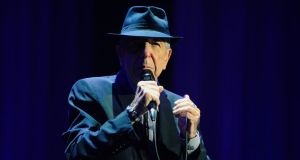 Leonard Cohen returned to Dublin for his fifth Irish visit in six years, and if his Irish fans were suffering from Lenny fatigue, they didn’t show it at the O2 last night.

“Thank you for putting your household budget in jeopardy,” he told the audience after performing his first song of the night, Dance Me to the End of Love.

This was the first of two nights at Dublin’s O2 – he performs again tonight – and though the docklands venue couldn’t hope to equal the atmosphere of his legendary concerts at the Royal Hospital in Kilmainham, Cohen did manage to turn the vast venue into a small, smoky jazz club for a couple of hours.

So, what brings the crowds out year after year to see him? It’s the sheer quality, which hasn’t diminished with age. His voice is pure liquid gold – with a dash of bourbon and just a dollop of guilt and self-loathing.

And his knees haven’t gone, either; many’s the time he gets down to beg forgiveness from someone he has wronged, or simply to genuflect at the wonder of it all.

“I’m not quite ready to hang up my boxing gloves just yet,” he tells the crowd. “I don’t know when we’ll meet again, but tonight we’ll give you everything we’ve got.” And he does, delivering a lengthy set of classic songs.

His trusty band were with him all the way, delivering virtuoso performances that did justice to Cohen’s magnificent back catalogue. Solos from violinist Alexandru Bublitchi, guitarist Mitch Watkins and laud player Javier Mas juxtaposed nicely with the gently undulating voices of Sharon Robinson and sisters Charley and Hattie Webb.

At the centre of it all, though, was Cohen’s seasoned voice, delving effortlessly into seldom-reached depths of the soul. And he sounds like he still means it – Bird On A Wire was sung with fresh passion and penance, while Come Healing proved that there’s redemption in this old sinner’s soul.

As long as Leonard Cohen keeps serving up his smooth nectar of timeless songwriting and skilled delivery, there’ll always be a welcome for him here.

Tiger King: You wait years for just one animal-collecting weirdo, then half a dozen arrive at once
Real news has value SUBSCRIBE