In a weekly column, Nialler9 gives us an overview of the things you need to hear in Irish music right now. 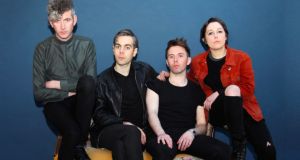 After the 11-minute '80s guitar workout of Zero Triptych, Belfast four-piece Girls Names gave us a glimpse into the future of their forthcoming Arms Around A Vision album with a song that fronts with screeching metallics before revealing a swaggering guitar-pop track. The album, the band say “acts as a love letter to European elegance – Italian futurism, Russian constructivism, Germany’s Zero Group and both Neubaten and Bowie’s Berlin.”

Bicep - Just Occasionally in your travels across time and space in the universe you encounter the same song twice in a weekend and it becomes your new favourite jam. The Belfast house duo's just-released track Just with its '80s siren bleep melody line was heard twice over the long weekend, first at Belfast's AVA Festival during a Boiler Room set in the docklands by the boys themselves and secondly, at Forbidden Fruit festival in Kilmainham on Saturday as played by man of the moment Jamie xx.

Staying at the Forbidden Fruit festival, Irish-born but London-based singer Louise Cunnane made her Irish festival appearance in a dress by Colin Horgan, singing and sashaying to her sparse and delicate electronic pop. While some of the songs struggled to be heard over the atmosphere, most recent song Love has no such problem, furnished as it is with desire and a full throwback production sound.

ALBUM OF THE WEEK

SOAK – Before We Forgot How To Dream

There was always a fear that label involvement with a singer as young as Derry singer-songwriter Bridie Monds-Watson, who is now just 19, would dilute the impact of such a young voice and mind has on their own via too much embellishment from a band crowding the space in the songs. However, SOAK's debut with Rough Trade leaves Monds-Watson's sweet young reverbed- drenched timbre at the centre of the appeal of the album through her teenage life lyrics. The music stays subtle, providing support through gentle brushes, distant orchestral touches and low-end. Previously released singles Sea Creatures, Blud and B A NoBody remain highlights but there's new forms in the same template with Wait and the direct acoustic dirge of Blind. It's Monds-Watson's childlike brogue which leaves the most lasting impression overall.

VIDEO OF THE WEEK

For a man who began as a singer of indecipherable words over xylophone-clacking indie pop music with Grand Pocket Orchestra, the likes of Camaraderie is a serious and welcome contrast. The song addresses Hanna's struggle with depression. In his own words: “Last summer I was crippled with depression, to the point where I was physically and mentally too sick to stand. I spent many weeks alone in my cottage growing ever more paranoid of the outside world and the joyful cheers of the summer crowd.” The video takes that idea and makes it a reality juxtaposing a fancy seaside home with a sense of isolation.