What you need to hear in Irish music right now, including Planet Parade, Somadrone, The Winter Passing, Enemies, Johnny Stewart and Cruising 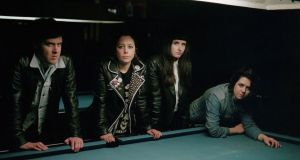 Songs of the week

Enemies –  Play Fire
There was a time five years ago where you couldn't walk into a venue in many Irish cities without the strong likelihood that there would be a post-rock instrumental band playing on the stage. The zeitgeist of math-rock is over now but that does mean that the remaining players are either moving on or staying put. For those who are attempting to move forward, it's a question of whether to incorporate new textures.

As band members get more confident with experience, that usually means vocals. For a band like And So I Watch You From Afar, that could mean the risk of smudging their sound with the influence of more-straightforward rock bands, as heard on their most recent release Heirs (which largely manages to avoid that fate). For Enemies' first song in two years, they play with vocals that work in a new way for the band, breathing a gossamer anthemic emotion to proceedings that culminates in a lilting bright way. Post-rock with choruses? It's a done deal.

Planet Parade – Blue Sky
Watch out for this Kildare duo in the next while. After disappearing for a couple of years, Michael Hopkins and Andrew Lloyd returned with a run of singles that were easily more memorable than their early forays. For Blue Sky, the band has hit an apex. The sun may or may not be shining when you hit play on this track but if an Irish band has come up with a more transportive Vampire Weekend-esque summer jam then I haven't heard it.

Somadrone – Invitation featuring Jape
Neil O'Connor is a fan of the early pioneers and influencers of electronic music and through his significant cache of vintage synthesizers, his music as Somadrone often channels the fringes and genesis of the genre. He's also prolific and for the first single from his fifth album Oracle, he settles into a Moroder-esque pelt. He's joined by his Redneck Manifesto cohort Richie Egan on backing vocals.

The Winter Passing - Daisy
Charged by alt-indie pop and the boy-girl vocals of Los Campesinos, Dublin band The Winter Passing sound decidedly more indebted to American pop-punk and emo than most. So it makes sense that their debut album to be released on September 18th will come out on both FITA Records in Europe and 6131 Records in North America. They play a show in Dublin's The Grand Social on September 26.

Irish release of the week


Cruising – Cruising EP
Members of Logikparty, Girls Names, Sea Pinks and September Girls have got together and made some visceral barrel-rolling rock music together. Inspired by the Al Pacino movie where his character goes undercover into the world of gay S&M clubs, the band's debut EP is the equivalent of a bar-room brawl, all sharp edges, hard knocks and leather jackets.

New artist of the week

Johnny Stewart
The words 'the next Hozier' is a cautionary tag that could bring more folly and lead to more copycats than anything else. However, if you like the kind of bluesy-rock that 'The Hoze' also is quite fond of, but like it with a more Black Keys-esque bite, then Flesh, Blood, Skin & Bone might just be the ticket for you. Keep an eye on this lad.

Ivan Yates turns the blowtorch on all politicians
10