Purists hopping mad over Metallica should just grin and bear it 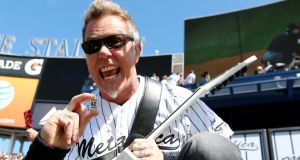 Metallica will open their headlining slot at the Glastonbury festival in two weeks’ time with a cover of Oasis’s Wonderwall. It’s a neat move, replicating Jay-Z’s use of the song as his opener six years ago following criticism by Noel Gallagher that hip-hop music had no place at Glastonbury.

Just as Jay-Z upset traditionalists who – even at a supposed counter- cultural event – wanted to reserve the big headline slots for “normal” rock bands, Metallica’s booking has attracted criticism by figures such as Jarvis Cocker and Arctic Monkey’s Alex Turner. Turner thinks the booking “does not add up” and that Glastonbury isn’t the right festival venue for them. Cocker fears Metallica are a “bit too abrasive” for a Glastonbury audience.

There’s a good reason why musicians should just shut up and play and never pass comment on anything in public. In a profession where you put on a pair of spandex trousers to go to work and sing “oh baby” into a microphone, it’s perhaps best to just count your blessings and not worry your celebrity-addled head with anything other than the size of your backstage rider.

Personally, I think Metallica should be horse-whipped live on Sky News for once trying to sue their own fans (during the Napster wars) but that has nothing to do with their eligibility to play at Glastonbury.

Turner is daft to suggest the festival is not the right place for them to perform. I wouldn’t cross the road to see Metallica play, but they can put on an impressive and spectacular live show – which is what is required for a peak slot at Glastonbury.

As for Cocker – who sounds more like an Aldi version of Morrissey as time goes on – Metallica have built their career on being abrasive. At 10pm on a festival Saturday night people, are not exactly looking for an acoustic singer-songwriter.

But odder still than Noel Gallagher, Turner and Cocker – who would all view themselves as cool rock n’roll types – coming across as Ukip-style little Englanders with a nasty streak of musical fundamentalism is the far bigger attempt to still remove Metallica from Glastonbury.

Animal rights campaigners have gathered thousands of signatures calling for the band’s removal from the bill due to frontman James Hetfield narrating a TV series about bear hunters. By bear hunters, we’re talking about despicable people who shoot bears in their natural habitat for no reason other than their own twisted pleasure in killing animals. Hetfield is also a member of the National Rifle Association in the US.

This petition is being taken seriously. Whatever about the music, Glastonbury has a “peace and love” tradition and is a charitable affair that raises money for environmental causes and aid relief in the developing world. And because the festival is now so venerated, serious questions are being asked about the bear-hunting TV show.

It places organisers Michael and Emily Eavis in a difficult position. If Metallica play, campaigners have the right to make a public protest during their set live on TV; if Metallica are pulled, then a whole new set of ethical guidelines will have to be put into place. And narrating a TV show about bear hunting may not be the worst thing any past headliners of the festival could be accused of.