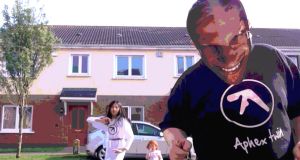 Aphex Twin made headlines this week by releasing his first official music video in 17 years. Fizzing glee at the idea of a new work from the Limerick-born, Cornish-raised Richard D James is par for the course, but few were prepared for the fact that said work would be directed by a kid from Co Dublin.

Ryan Wyer, 12, from Rush in Fingal, is the first person to direct a video for Aphex Twin since 1999’s Windowlicker, the bombastic and satirical promo directed by Chris Cunningham. Not for nothing is it frequently cited as one of the greatest music videos ever made.

Wyer’s promo for Cirklon3 is a little less produced, consisting of his friends and family manically dancing and pulling faces, festooned with Aphex masks and logo tees. This is not Wyer’s first video treatment of Aphex Twin’s work. The young director is clearly a fan, having soundtracked James’s music on his YouTube channel, with one particularly vibrant and joyous example is his video for Minipops 67 [120.2][source field mix], the lead track from 2014’s Choice-nominated album Syro. When he made the video, Wyer would have been just 10 or 11 years old.

Public resurgence Aphex has himself undergone something of a public resurgence of late, following years of near-ascetic solitude, and more than a decade in which his attitude to press engagements could generously be described as hostile. Then last year, with little forewarning, he released between 270 and 300 tracks via various Soundcloud pages.

These releases covered a span of nearly 20 years and included both re-worked or alternate versions of classic Aphex or AFX tracks, as well as dozens – if not hundreds – of brand new works, seemingly orphaned from any release schedule.

A bit of digging through the vast web of commentary attached to those tracks appears to show an early acknowledgment of Wyer’s work from the notoriously distant artist, with reference in comments to Aphex Twin’s Cheetah7-Teac that drew admiring notice from James for Wyer. “[A]mazing, no words fot his [sic] kid, wow love his ambient one in the car :))))”.

Wyer’s biggest fan is of course his mum. Writing on her Facebook page she said: “It’s really amazing, no one gets it how music is Ryan’s passion, even though it’s a bit crazy what he listens too. Kids give him such a hard time but he’s always persisted with what he likes. It’s good to be different; you don’t always have to fit in and do what others want you to do . . . All the trips to Tower Records for you’re crazy CDs have paid off.”