Lucinda Williams: ‘My stuff is so much more than country’

Recognition came late for the Americana musician, but when the accolades came they were big ones: Grammys and having a strand of marijuana named after her 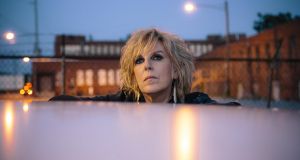 Lucinda Williams: “Nobody would sign me because they didn’t know how to market me.” Photograph: David McClister

If there is one person who can make an album about a motorway interesting it is Lucinda Williams. All right, even though Interstate 20 sounds marginally more romantic than the M50, the folk-blues-Americana-rock musician has pretty much taken inspiration for her latest record from the road that runs through her native Louisiana and the surrounding states.

The Ghosts of Highway 20, is about so much more than just a road, but the seed of her 12th studio album was planted when Williams played a gig in Macon, Georgia.

“We played a concert at the old Cox Capitol Theatre in downtown Macon, where the Allman Brothers got their start,” she says in a deliciously syrupy southern drawl. “It impressed upon me how little the town of Macon had changed. I hadn’t been back there in I don’t know how long, so I started flashing back on where I lived there as a child.

“After the concert we were leaving on the tour bus, and I noticed the exit signs along the way for these other towns, like Vicksburg, Mississippi, where my brother was born; Jackson, Mississippi, where my sister was born; then of course Macon was where I started school and where my dad took me to visit when he went to visit the writer Flannery O’Connor when I was about five years old. She lived in Milledgeville, Georgia, which was about an hour away.

“The whole thing about travelling and highways, it’s so much a part of American culture and I’m fascinated by that. I didn’t initially write all of the songs to all fit together, so it wasn’t like a concept or anything, but I think all my songs stem from the same roots.”

It has been quite a journey for Williams, now 62, to arrive at this point. She started taking guitar lessons in 1965 and dabbled in playing “protests, coffee shops, that sort of thing” as a teenager, before attending university to study cultural anthropology.

After her parents divorced, she visited her mother in New Orleans and it was there that she was given her first big musical opportunity. It helped, she said, that her father, Miller Williams – a poet who read at Bill Clinton’s inauguration – was of a similarly creative mindset.

“I ended up hearing about this place that was hiring musicians in the French Quarter,” she says. “They said I could come in three nights a week and play for tips, so I called my dad because I was supposed to go back to school in the fall. I told him what happened, and he said, ‘Well, that’s okay. If that’s what you wanna do, then go ahead.’ I really look at that as a major turning point, because if he had said, ‘No, come back and go to school’, I don’t know what I would have done.”

Although Williams released her first album in 1978 and continued to intermittently release and tour over the years, she initially developed a reputation as a songwriter for others. Her track Passionate Kisses was a huge hit in 1993 for Mary Chapin Carpenter. It wasn’t until 1998’s Car Wheels on a Gravel Road that she scored her own major breakthrough.

“I mean, that’s just the way the music business was back then,” she says. “I spent about 10 years cutting my teeth in Houston and Austin, Texas, but it wasn’t really until I got out to Los Angeles in 1984 and got exposed to the music industry and different record labels that things started to happen.

“They were interested but nobody would sign me because they didn’t know how to market me. They kept saying that I fell in the crack between country and rock, which of course eventually became Americana or alternative country, but they didn’t have that back then. So I think I was just a late bloomer.

“Yeah, it would have been fun to be on the level that I’m on now and be in my 30s, but it just is what it is, and everybody’s time is different.”

When the accolades began to roll in, they were big ones: her name, for example, is often preceded by “three-time Grammy winner”. Many musicians scoff that such things do not really matter, but Williams is not one of them.

“It means a lot,” she says. “It’s a great honour. I don’t like to see when other artists go, ‘Oh, it really doesn’t mean anything and blah blah blah’. Of course it means something. It’s just people saying ‘Hey, good job.’

“I compare it to an athlete winning an Olympic medal. It’s a similar thing. So all of those things make a difference. And then there was this particular strand of marijuana that came out of Colorado that they named after me.” She laughs. “I mean, I don’t smoke any more, but that was an honour, too.”

Williams has always taken her time with things, but her last few albums have come thick and fast. Her mother’s death in 2004, she says, brought a huge surge of creativity in its wake. So, too, did her father’s death in January last year. They both inform The Ghosts of Highway 20. Louisiana Song is written for her mother, Dust is a musical reworking of a poem of her father’s and the beautiful If My Love Could Kill was written about his battle with Alzheimer’s disease.

She sees these as tributes to her family and her roots. Still, there is the issue of what she has previously referred to as the “eternal sadness that never goes away” in her music; is she content these days?

“I feel pretty well-adjusted,” she says, pausing to consider the question. “I told [my husband] Tom today, I said ‘I’m in a really good mood today. The sun’s shining outside, we slept in a comfortable bed in this hotel in London, I was able to wake up in time to get us breakfast and room service – which is a big deal for us.’

“I just think that’s part of the artistic process and being an artist. I think a lot of people have that sensitivity, but they either get scared off, or don’t know how to deal with it. But I think to be human is to suffer, basically. That doesn’t mean that we go around being miserable 24 hours a day, but I think it’s important to have a sense of how to feel things. I just feel very blessed because I have an outlet.”

Contentment established, there is just one thing left: don’t make the mistake of assuming that what Lucinda Williams peddles is country.

“Sometimes that gets to be a little annoying because my stuff is so much more than that. Some people think, ‘Country? Oh, she must be this, or she must be that’. In a way, it doesn’t really matter because I just do what I do anyway.

“On the other hand, for example, Rolling Stone had a really good mention of the new album, but the title of [the article] was Best Up-and-Coming New Country Albums for 2016. It was all kinds of people, from Sturgill Simpson to Loretta Lynn to Lorrie Morgan to me. It didn’t make any sense to me.

“But then I was doing an interview in Los Angeles last week, and this one guy referred to the new album as ‘cosmic folk-rock’. I said ‘That’s it. I love that, it’s great.’ So, cosmic folk-rock: I’ll take that.”