Smart, savvy and sussed, Ella Yelich-O’Connor is the pop star of the year. She tells Jim Carroll how “Royals” changed everything 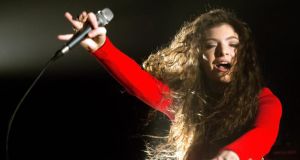 The pop star of 2013 is on the other end of the phone. A year ago, Ella Yelich-O’Connor was a veritable unknown. An articulate, sharp and well-read New Zealand teenager with a record deal, she meant zilch beyond a circle of family and friends in Devonport by the harbour in Auckland.

A year on, with her song Royals pirouetting with panache from every radio station around the globe, it’s a different matter. Yelich-O’Connor aka Lorde is a name to be reckoned with.

A song to best the best of them, Royals has had pop fans swooning with delight all year long. Simple yet complex, its playful chants and sharp-as-a-tack beats allow the singer to beat the drum about the excesses of pop culture using that very medium to make her point. It’s a song to rule the world, a song written quickly in half an hour the summer before last by the then 15-year-old.

But Royals doesn’t just exist in some strange vacuum. Turn to Lorde’s debut EP, Love Club, or her starry debut album, Pure Heroine, and you’ll hear plenty of songs with similar appeal. You get the feeling from her music that here’s someone with her eye on the long game.

That becomes a whole lot clearer when you talk to the 17-year-old with Irish-Croatian bloodlines. She’s savvy, smart and sharp, someone who had no intention of having the wool pulled over her eyes.

You quickly learn, too, that she’s always been like this. “I’ve been very good at saying no for a long time,” Yelich-O’Connor says at one stage. “I’m really stubborn and I’ve been working with the record company for a few years and I’m not scared of people in the industry, even if they’re legendary figures or whatever.

“I know what’s right for me and for my music and my image and so I call the shots. When I was 14, I had a problem expressing what I wanted. Now, I figure if I don’t, I’ll end up with something I’m not happy with so I might as well say what I want now.”

The Lorde story begins with a video shot at a school talent show five years ago. The then 12-year-old Yelich-O’Connor was onstage with her friend Louis McDonald and she sang Duffy’s Warwick Avenue as part of the Belmont Idol competition. She won, but she was also, unbeknown to herself, starting off in a much different game.

McDonald’s father filmed the performance and the video ended up on Scott Maclachlan’s desk. Maclachlan, an Englishman, had worked with acts such Groove Armada and Basement Jaxx back home before emigrating to New Zealand and setting up shop at the local branch of Universal Music.

He was intrigued by what he saw and met Yelich-O’Connor and her mother. The singer insisted that she wanted to write her own songs rather than just do covers, and a development deal with the label followed.

Yelich-O’Connor says she was wary from the outset. “To be honest, my family knew nothing about the music industry and that’s why I was so cautious about everything. I knew there was an opportunity, but I’d heard so many stories about rip-offs and bad deals that I wanted to take my time. That performance on the video was done when I was 12 and I didn’t sign with Universal until I was 14, so I learned about what it was first and if it was something I wanted to do.

“I signed a development deal which meant I had time to go into the studio to learn how to write songs and figure out what I wanted to do before making a bigger commitment. It also meant I didn’t have to do it full-time. After a year or two, I realised that I loved making music and writing songs and that’s what I wanted to do.”

Universal’s initial attempts to team her with seasoned songwriters did not go well. “That was my fault,” Yelich-O’Connor admits. “I was just so nervous about baring my soul and putting these things out there that I found it really uncomfortable to sit in a room with someone and be expected to do all that.”

One of the problems was that her potential co-writers were a lot older than her and didn’t share her musical interests. This all changed when Joel Little came along.

“Two really important things were that Joel knew about electronic music and was closer in age to me. Before him, I hadn’t written with anyone who knew about electronic music and that was definitely a barrier. Joel was young and cool and I liked hanging out with him. I started to feel comfortable about sharing something intimate and personal with someone I didn’t know really well. Joel is a real super nerd and I felt right working with him.”

Yelich-O’Connor’s electronic music playlist would have room for James Blake, Mount Kimbie, Jamie xx, Two Inch Punch and Burial. Blake, in particular, would be on repeat. “It’s the music more than the lyrics for me – I don’t listen to his lyrics as much as the minimalism of the sound. That was something I wanted to take and apply to pop music because no-one really does that with pop music.”

With Royals, though, it was Yelich-O’Connor the hip-hop fan who was to the fore. “I was trying unconsciously to create a flow with Royals. It was one of the first songs I’ve ever completely finished so I was definitely green to songwriting in the scheme of things. The lyric came to me very fast.”

Yelich-O’Connor’s lyrics are one of her strong suits, with their superbly observed and pointed lines about the good and the bad aspects of teenage life. This strong strain of lyric writing may be directly related to growing up in a house full of books.

She waxes lyrical about her current likes as a reader. She’s a fan of Sam Lipsyte’s The Fun Parts – “really funny, mean short fiction” – and Claire Vaye Watkins’s “Battleborn” – “she strikes a really good balance between saying interesting things and saying them in a beautiful way”.

Had music not grabbed her attention, perhaps writing would have given her creative satisfaction? “Writing did appeal to me, but if you write lyrics and blend them with melodies and sounds and beats, it becomes a really amazing thing, almost a tangible thing, something which can make peoples’ bodies move and hit their brains.

“I find that so cool that you can have this piece of writing which becomes this thing which has so much physical effect on people.”

Right now, she’s as happy as a teenager can be when they’re on top of the world and have journalists on the phone every day asking them stupid questions. She’s keen for adventures, for the next step up, for whatever 2014 and beyond will bring her way. She knows it’s a damn weird place to be, but she strikes you as someone who is more than prepared for whatever comes next, no matter what that is. A teenage role model? She’s ready for that.

“It would be a little naive of me to think that I wouldn’t be a role model, being in the position that I am and being a young person doing well at this,” she notes. “That being said, I find the concept of people looking to me for anything to be terrifying and I hope I don’t screw it up.

“Some things, though, have been strange to get used to. I find it strange, for instance, that feminism is dragged up all the time because to me equality is completely normal. I equate feminism with thinking that gay marriage is OK and thinking that people of all races should be accepted is OK. It seems like a no-brainer to me. But some people are like ‘woah, crazy’ when I say that.”

She giggles down the phone. “I guess they’ll have to get used to me”

Dublin International Film Festival: A guide to the best movies
2

Rise of the killer robots: The future of war
Real news has value SUBSCRIBE