Lady Gaga at the Super Bowl: no controversy, lots of glitter 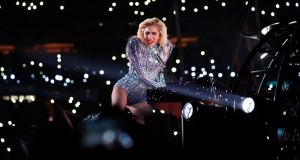 Lady Gaga went for one big, glittering, diverse party with her Super Bowl halftime show on Sunday. “We’re here to make you feel good,” she declared mid-set. At a pre-game news conference, she had promised a statement of “inclusion”, an upbeat and uncontroversial stance, and she made good on it as she began her set, singing a few lines each of God Bless America and This Land Is Your Land and reciting the “one nation indivisible” conclusion of the Pledge of Allegiance.

Wearing a shiny, silvery, big-shouldered sci-fi bodysuit and matching high-heeled boots, with a glittery mask painted around her eyes, Lady Gaga was lowered through the air, on suspension cables, into NRG Stadium in Houston, showing off a trapeze-like flip. And she started belting her hits, with a nod to the local audience: Poker Face announced, “I want to hold ‘em like they do in Texas. ”

One of those hits was Born This Way, her dance-floor anthem of self-acceptance for all kinds of people. “You’re black, white, beige, chola descent / You’re Lebanese, you’re orient,” she sang, and later, “No matter gay, straight, or bi / Lesbian, transgendered life / I’m on the right track baby / I was born to survive.” It was doubtless the first time the word “transgendered” had been sung at a Super Bowl halftime show. Dozens of dancers of multiple skin tones and genders joined her, matching her moves in exultant line dances and embodying her message of empowerment as a shared celebration.

But most of the show was simply about full-tilt pop fun: songs such as Telephone, about dancing at clubs, and Bad Romance, about falling in love and lust. It was a megamix of her songs spanning her career, from her 2008 debut single, Just Dance, to Million Reasons, the power ballad from her 2016 album, Joanne.

In an amazing upset. #LadyGaga has won the #SuperBowl 🏈#GagaBowl🏈 pic.twitter.com/5ern7AihH4

She sang “Million Reasons” from a piano as people waving orange electric torches made patterns that radiated across the football field; that was her relatively still point in a fiercely athletic performance. “The Super Bowl is what champions are made of,” she declared as Bad Romance revved up.

Lady Gaga has proudly presented herself as the continuation of generations of song-and-dance showbiz troupers, a tradition of fervent effort and well-rehearsed spectacle delivered with joy.

She sang with hardworking gusto throughout the set, even as she covered considerable yardage strutting and kicking, prancing and gesticulating, pumping her hips and shaking hands with fans.

It was a show of shiny costumes and big smiles, of a huge group of dancers all sharing the same moves, an outpouring of energy that was eager to please everybody.

Lady Gaga ended it with one last strut, up a ramp, and a self-congratulatory gesture that has been used by both rappers and an ex-president: a microphone drop, earned with sweat. – (New York Times Service)