Kanye kick it? Protest music marches to a new beat

Every generation has a soundtrack of its struggle. Ian Maleney marches on, shouting slogans and carrying the banner of music into a new dawn. Are we ready to rock the system? 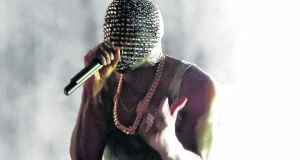 Kanye West, a man and artist full of unresolved contradictions

It’s a common complaint that music today just doesn’t have the political edge it used to way back when. For some, the golden age of protest music is the 1960s – the ballads of pre-electric Dylan, the worker’s songs of Woody Guthrie and Pete Seeger, even the right-on hippie leanings of the Woodstock generation before they discovered money and cocaine in the 1970s. For others, the ultimate in protest is the punk of the late-1970s and 1980s, the sneer of John Lydon, the sincerity of Billy Bragg or US hardcore’s mix of overt seriousness and ridiculousness.

A few decades on from those halcyon days, perhaps it’s worth taking a look at what protest music means today. What are we looking for (and so often, apparently, failing to find) in protest music now? What is it supposed to do in our time?

Sounds of a protest breakdown
We can break it down into some broad categories. There’s protest music that confirms our pre-existing opinions about the issues of the day, anthems which makes us feel we’re not so alone in the world and that our voices together might achieve something. There’s protest music that informs us about things we might not have been aware of – a particular oppression, a certain exploitation – awakening a new and tangible political awareness in the process. There’s also music that calls into question our everyday behaviours, our relationships, our actions and inactions. Then there’s plenty of music that slips between these descriptions or something like Marvin Gaye’s What’s Going On? which could fit all three.

We also have to ask what we mean by music. Is it possible to be political without words? With lyrics, it’s usually quite easy to understand what’s going on; the message is there, loud and clear, for anyone who wishes to hear it. With instrumental music, the political edge may be implicit, something which needs to be decoded or understood in a specific way. You can look at examples such as Boards of Canada or Godspeed You! Black Emperor, where the titles, the imagery, the samples, add up to a particular political message. The immediate difference is in the directness; where instrumental music can be like a game of charades, acting out what the artist wants to say, lyrics can just come straight out and say it. However, each route leads to a different method of understanding, something like the difference between knowing and feeling.

Word up
Each has its strengths, its time and place. The lyrical route can soon date and sound cheesy, while the more abstract route is often derided as pretentious or not understood as political at all. Take techno, which is rarely understood these days in terms of subversive politics. On the level of content, techno started out stamped with the imprint of racial politics, often militant in tone. On the level of form, it encourages – like ambient music – a radically different way of relating to sound, time, place and even other people. Extended repetition does a particular thing to the brain that forces it to think differently, and changing the way we feel or think or behave, our patterns of consumption, is a political act.

Perhaps one major change in the nature of political music, as in music in general, is the revolution in how that music is produced, publicised and written about. Up until they began to properly splinter in the 1980s, the music industry and its attendant media were improperly monolithic. The music industry itself – by which I mean the major labels, bigger indies, booking agents, publicists – is inherently conservative and often outright oppressive. The simple reason for this, and all music industry activity, is profit.

This kind of thing applies equally as much to the music press, from the first issue of Rolling Stone right through to today. What’s left of the music press now, whether print or digital, desperately chases ads and clicks at whatever cost necessary. Few outlets now have either the cultural authority (self-imagined or otherwise) or raw budget to facilitate engaged, long-form cultural journalism that might bring the music’s political heart to the fore. The pace at which the mainstream media operates now leaves no time or space for ideas generated there to make a real impact on the wider culture. Our ability now to hear almost everything at will, in an environment unmediated by institutional opinion, often means we form opinions in a vacuum – alone, with headphones on, typing. There are positives to this, but when a culture – or politics – becomes ephemeral, individualised, commercialised, it loses a particular type of power. This is why there is a war being waged on public space and why DIY venues, collectives and publishers are so important.

Fight the Power
So the question we’re left with is this – why expect a conservative, profit-seeking industry such as the music industry, or the press, to produce the kind of work that would undermine their own power? Why expect them to create work for a genuinely critical, engaged audience when all they’re interested in is further consumption?

What’s important is the music’s ability to generate “discussion” – by which they mean more content, a stance that goes down well with Facebook and others who would control what we see. There is no sincere political basis for this type of industry. It is entirely concerned with creating a reactionary environment where page-views – ie leading the conversation – are all that matter. The liberal media reacts to obvious red flags – say, Lily Allen’s Hard Out Here video – but refuses to address the systemic issues in its own composition as well as that of the entertainment industry it relies on for survival. What hope for genuinely progressive political art in that kind of environment? The personal is political While disengagement from macro-politics is often framed as apathy, most people are understandably more concerned with everyday behaviours and personal power relationships than the daily procedures within government buildings. Such personal politics have a long history in music, from female country singers with boozed-up, no-good husbands to hip-hop’s articulation of a black power and identity; from riot grrrl’s feminist anger to The Knife’s two-hour gender studies workshop, Shaking The Habitual, an album it seemed almost no one was prepared to engage with on its own terms – the indie music press being better read in Bangs and Fantano than Butler and Foucault.

Identity politics exist because some identities are still seen as more acceptable, more “normal”, than others. An example: Miley Cyrus. Twerking, a form of dancing that has long been practised by black women, is incorporated by Cyrus into her performances as a means of identifying herself with this “risqué”, “shocking”, “not normal” activity – the result is a liberal, white media getting up in arms about decency and the poor girl being exploited to sell herself. But she’s not (just) selling herself; she’s selling someone else. Someone black. For the media, the question is essentially one of manners, but there’s a lot more at stake.

If I had a rocket launcher...
In a globalised, networked, postmodern world, anything goes – significance is a product purely of the marketplace. Appropriation is an easy shortcut to a sense of risk and danger, the thrill of the new that pop music thrives on. But, for the conservative music industry, this danger has to come in a saleable package. This is a reflection of the failure of multiculturalism more generally, where that which is “different” is kept at a safe and profitable distance, rather than engaged with in a project of mutual understanding and co-existence.

That distance is obvious any time anyone tries to cross the line. Take Kanye West, a man and artist full of unresolved contradictions. While he raps about the racist prison-industrial complex or the way money operates across race lines, the media obsesses over his marriage, his clothes, his ego. All that matters is his celebrity status – the art is secondary and the complexities, the good and the bad, go unexamined because they often make for uncomfortable truths.

As ever, it is the marginalised, the oppressed, the exploited who are speaking out – from Mos Def in Guantanamo to Killer Mike on CNN, Pussy Riot, radically anonymous in Russia to Laura Jane Grace, radically herself in Florida. Often they aren’t heard because the dominant powers in the relevant industries don’t want anyone to hear them – there’s no money in their problems.

Bread and roses
Perhaps the most important thing that identity politics has given us is the idea that it’s our personal behaviours, our everyday actions and relationships, which need to change, as much or more than laws and policies. If we want to see this kind of understanding in music, we have to look beyond the surface – beyond what it’s saying and into what it’s doing. The protest songs of the past were polemic, but today’s politics need a different kind of protest, a protest that’s physical, enacted, lived. Everything else is a slogan, easily sold. Some people understand that better than others, and it’s to them we ought to be listening.

Todd Haynes: ‘All my movies are critical and financial disappointments initially’
9