Is the Dublin International Piano Competition lagging behind?

The technical standard at this year’s competition has been high, but other shortcomings have become apparent 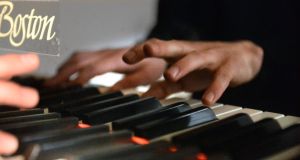 ‘It has been a particularly gruelling competition, with a higher proportion of players striving to make an impression through sheer volume than I remember from any previous year.’ Photograph: Cyril Byrne

I experienced a real shock to the system last Thursday. The Ulster Orchestra was at the National Concert Hall for a first Dublin appearance at the end of its first season under their new, highly regarded principal conductor, Rafael Payare.

Payare, like one of the hottest conductors on the planet, Gustavo Dudamel, is a product of Venezuela’s El Sistema orchestra scheme. He’s relatively young (born 1980), dynamic, colourful and athletic: all the things, in terms of conducting, that the young players I listened to for more than 40 hours at the Dublin International Piano Competition want to be in terms of the piano.

The concert opened with the prelude to Act III of Wagner’s Die Meistersinger, expressively rounded, beautifully calm but always moving forward, tonally alluring but not in a demonstrative way. In short, the performance was all about the music, not about the playing, the opposite of the impression that so many of the performances at the competition had made.

The soloist in Elgar’s Cello Concerto, Alisa Weilerstein, impressed in an assertive, emotional way – think Jacqueline du Pré rather than Steven Isserlis – and Payare cast Shostakovich’s 10th Symphony in a rather warmer light than audiences are used to hearing in Dublin.

The RTÉ National Symphony Orchestra and the RTÉ Philharmonic Choir teamed up at the NCH on Friday for Mendelssohn’s Elijah under Paul Daniel. Daniel took a highly dramatic approach to the work, giving the kind of performance that seemed to feel the need to force every last detail on listeners’ attention.

The singers of the RTÉ Philharmonic Choir rose to the challenges with enthusiasm and firm, fresh tone. The soloists were more mixed, with the Elijah, Darren Jeffery; and tenor Joshua Ellicott (standing in for the indisposed Mark Wilde) sounding more on target than soprano Celine Byrne and mezzo soprano Imelda Drumm.

I only stayed for the first part of the Mendelssohn. The overall effect of Daniel’s approach, with everything pushed into the foreground, was uncomfortably reminiscent of the forceful displays so common at the piano competition.

As I write, the competition is not yet over, although the initial field of 63 has been whittled down to the final four: Alexander Bernstein, Alexander Beyer, Caterina Grewe and Nathalia Milstein. (The final took place last night; for the result, see dipc.ie.) It has been a particularly gruelling competition, with a higher proportion of players striving to make an impression through sheer volume than I remember from any previous year.

It’s an issue that’s been around from the earliest days of the competition, and one year I brought in a sound level meter to see how different players fared. There were a handful who trespassed into an area that would raise health and safety concerns if sustained over a length of time in a place of employment. You could extrapolate that hearing damage from those culprits’ extended practising would be likely to exacerbate their bad habits as they grow older.

But the most important lesson from the meter readings was that the loudest players were not the ones people seemed to find most objectionable. The issue was not how loudly they played, but when and for how long they did it, and whether they managed to convey the necessary contrasts.

This year I took up the issue with Ulrich Gerhartz, one of Steinway’s leading piano technicians and tuners, who prepares pianos for concerts and recordings by many of today’s greatest pianists.

I asked him if he had ever encountered any of those greats making and sustaining the high volume levels that were heard in this year’s competition. He hadn’t. It could be the case that there’s a generational sea change under way in the sound world pianists want to work with. Or it could be that a rising proportion of the players who make it into the Dublin competition are set on a misguided course.

The general technical standard of this year’s competition has been higher than any other I can recall. And while it’s a welcome development that some of the troughs have been eliminated, it seems, sadly, that some of the peaks have, too. The individuality and artistry shown in previous competitions – including styles of playing that the juries have often turned up their collective noses at – have been in shorter supply this time around.

The Dublin competition has been in trouble since losing its last title sponsor in 2009. The monetary value of its first prize is now around half of what the Leeds and the Chopin in Warsaw have to offer. Dublin’s €15,000 top prize is now the same value as Warsaw’s fourth. And Dublin is still lumbered with the damaging decision that reduced its finals (and the number of placed prizewinners) from six to four. The cutback is not just a loss to the competition itself – only four prizewinners take its name around the world – but competitors’ raw chances of making it to the finals have been reduced from roughly 10/1 to 15/1.

The competition has fallen behind in other ways, too. In its early days, both the semi-finals and finals used to be broadcast on television by RTÉ. Now they’re on radio only, and, unlike, say, Australia’s Sydney International Piano Competition, where every round is featured live on ABC Classic FM, RTÉ Lyric FM carries only the finals live. That leaves live internet streaming, which in Dublin is audio only, and which is not available for replay. By contrast, the video of Nathalia Milstein’s performance at the preliminary round in Warsaw last month is still available for viewing, along with the rest of the 82 hours of that round.

The competition is obviously in serious need of a new sponsor. It needs to haul itself fully into the 21st century, where the possibility of a YouTube video of an important competitive performance is a big deal for young players. One of the big successes of the 2006 Dublin competition was Elizabeth Joy Roe, who was eliminated in the second round. Her videos as part of the Anderson and Roe Piano Duo helped her carve out a special niche (see andersonroe.com) and her career has developed to the point where her first Decca Classics CD – the concertos of Barber and Britten with the London Symphony Orchestra – was issued last month.

I can’t help thinking that the Dublin competition has been left behind in today’s connected world, that it’s just not attracting the calibre of player it once did. Of course, a big international splash and a great career by this year’s winner could change all that.