TG4 documentary shows why fiddler Bryan Rooney is so revered 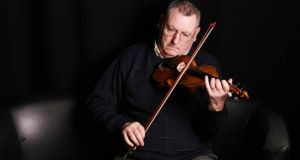 God knows how many Irish people living in London have, over the decades, been stopped in their tracks by familiar music wafting out the door of some establishment in Kilburn or the Holloway Road. The chances are that many of them were listening to a snatch of magic provided by 63-year-old master fiddler Bryan Rooney.

The young Co Leitrim emigrant, 12th in a family of 14 children, arrived in London in 1968 from Derragoon, near the village of Kiltyclogher, the birthplace of the 1916 Rising leader Seán Mac Diarmada. Long known as “the Godfather” in the traditional Irish music fraternity that reveres him, Rooney was 16 when he emigrated.

His story, soon to be told in a TG4 documentary titled, simply, An Godfather, is far from the misty-eyed tale you might expect. Rooney wasn’t yet three years old when his father, Jack, died, and his own fairly recent catalogue of health scares left him unable to even lift his beloved fiddle for a period.

Jack Rooney had been a fiddler, but Bryan’s introduction to music came through the old 78rpm records bought by his mother, Mary, who didn’t play herself “but was always humming a tune”.

“It was great craic,” he says of his upbringing . “There were seven girls and seven boys. We had our own football team, but you had to fight for your corner. We often meet up and reminisce about the mischief we got up to – nicking apples, the usual sort of thing.”

London was the epicentre of the Swinging Sixties, and the boy from Kiltyclogher (who, 46 years on, hasn’t lost the accent) embraced the new life.

“I suppose I was half a hippie,” he says.

“London was a great town. There was always work here,” Rooney says.

A brother quickly introduced him to a pub called the Favourite, off Holloway Road, which hosted probably the most famous Irish music session in London. “It was beside the Tube station. There were musicians from 32 counties there. Everyone went on Sunday mornings.”

The pub was demolished in 2002 to make way for the Emirates, Arsenal’s new football stadium.

The Sunday session mainstays were Irish fiddler Jimmy Power, who famously ended each week with the instruction “now go home to your dinners”, and pianist Reg Hall.

“They were lovely people,” says Rooney, whose life in London has been defined by the camaraderie he experienced among the musicians and the Irish builders he worked alongside on construction sites.

He earned less than £6 a week in his first job at a paper plant on Chancery Lane. After a spell driving forklifts in warehouses, he spent close to four decades on building sites.

Tragically, the year before Rooney left for London, his brother Hughie, who was next in line to him in the family, died on a building site there.

“He was 17. We started playing the fiddle at the same time. He went into a lift shaft. It was a long time ago, but it never left any of us, “ said Rooney.

Asked about his reputation for welcoming the most inexperienced and shyest player into a session, Rooney says others will do that for his grandchildren Ryan, Joseph and Olivia. His son Michael John was “more interested in kicking a football” than playing music and his daughter Mary wasn’t bitten by the bug either but he wrote a tune, M&M, for them.

For some people the best thing about Irish music is the funny titles of the tunes, Hold the Candle Close ‘til I Shave the Chicken’s Lip and The Hairy Chested Frog – a favourite of Rooney’s – being good examples. There are other discerning music lovers who, over the decades, flocked to venues such as the White Hart in Fulham Broadway or the Irish Centre in Camden Town and would recognise, according to Carty, the “sublimely subtle bowing technique” of Rooney anywhere.

Eight years ago the Godfather had a heart attack. During a routine follow-up X-ray, lung cancer was diagnosed. For a long time Rooney was too weak to even lift his fiddle. But by 2011 he was back playing, and in 2012 TG4 bestowed the coveted Musician of the Year award on him. At the end of that year, after a gig in Listowel, he fell off a stool, breaking his wrist. It seemed the Godfather would have to hang up his bow.

But the documentary, narrated by another fan, the actor Brendan Gleeson (“a grand man and good fiddler”, according to Rooney) shows he is back.