How to win the Eurovision song contest 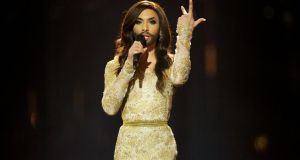 Thursday night’s relegation was a big disappointment, and we salute Kasey Smith and Can-Linn for a valiant effort. But Ireland lost its Eurovision mojo long before this year.

Performing well in the 21st century’s biggest live music competition programme requires strategy and nous. Some of tonight’s performances have this in spades.

Here’s what we can learn:

We’ve had drag acts in Eurovision before. Dana International, who won for Israel in 1998, is transgendered. But we’ve never had a drag queen with a beard before – particularly not one fronting a superlative Euro-power ballad. Conchita Wurst may well bring Eurovision victory to Austria for the first time since 1966, and her song Rise like a Phoenix is charting in 31 countries around Europe.

Spot in the running order: 11th

What we can learn: You gotta have a gimmick.

2. Hire real artists and listen to them.

Before Tuesday’s semi-final the Common Linnets were unknown. Now they’re (along with Wurst) the contest’s big buzz. Solo Dutch country music singers Ilse de Lange and Waylon, who are old friends, were approached separately by the Dutch broadcaster to sing in Eurovision. “We were having breakfast in Nashville, and we said hey, lightbulb! We should we do this together,” says de Lange. The broadcaster agreed, and a duo was born. The risky choice to sing to each other rather than outwards towards the audience was also their idea. The result is Calm after the Storm, an intimate number that stands out from all the others (see no. 1 above) and might well be our winner.

Place in the running order: 23rd

What we can learn: Artists are smart.

Let’s face it: Ireland’s act looked a mess on Thursday night. Too much going on, no real relationship between the different elements: it was as if the song, the staging, and the camerawork were fighting with each other and nobody won. For a lesson in how to create a coherent, camera-friendly package, look no further than top-rated Sanna Nielsen from Sweden. Great song? Check. Gorgeous, confident singer? Check. Uber-dramatic lighting effects that convey the meaning of the song? Check. Camerawork to complement and highlight all of the above? Check. Undo may redo the country’s 2012 success and bring Sweden its sixth Eurovision victory.

Spot in the running order: 13th

What we can learn: Teamwork, people!

Circus skills are this year’s big Eurovision staging fad. Ukraine’s Tick Tock plays out a romantic pursuit on a human-sized hamster wheel; Russian twins sing Shine on a giant see-saw; Azerbaijan’s otherwise rather snoozy Start a Fire features a comely trapeze artist. But surely it’s Greece who are having the most fun with acrobatics this year: I’ll not spoil it for those who didn’t watch the semi-final, but keep your eyes on the stripey box behind the rappers singing Rise Up. This trend didn’t come from nowhere: in the performing arts world, circus has grown increasingly fashionable and innovative over the last ten years. The larger point: successful Eurovision acts channel the broader culture.

Spot in the running order: 10th

What we can learn: Bouncy castles aren’t just for kids.

5. A comeback is always possible.

There’s been few countries more out-of-step with Eurovision trends in recent years than the United Kingdom: their songs and artists (Engelbert Humperdinck, Bonnie Tyler) literally came from a different era. But this year the UK pulled up their socks, turned on the radio, and fashioned a perfectly credible Eurovision performance around a singer, Molly Smitten-Downes, who sounds more than a bit like Lorde. Raise your lighters to the hipster-chic Children of the Universe, which closes off tonight’s competition!

Spot in the running order: 26th

What we can learn: Woganesque cynicism is a self-fulfilling prophecy. There is another way.

‘We are the weirdoes, mister’: Why women love witches
3