How Music Works: SXSW – How bands can make it work

Niall Byrne talks to people about their work in the music business. This week, Una Johnston, sales manager of the South by Southwest festival for the UK and Ireland 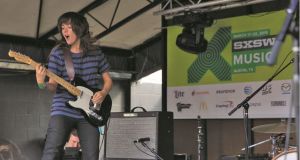 Operating like a music industry spring break, South By Southwest (SXSW), the annual showcase of music, film, interactive and everything in-between, hosts thousands of bands and artists at all levels in their careers in to Austin, Texas for a week in March.

It's where the industry goes: labels, managers, agents and media come to hang out in the sun, network, make deals, and discover the fresh talent who will dominate the new music landscape in the coming months, and hopefully, years.

SXSW is not only where the music industry goes - advertising, digital, tech, and big global lifestyle brands are among those also attending the annual showcase of music, film, interactive and everything in-between.

A big sweet spot
“The whole convergence thing is such a big part of what we do that area between music and film and music and digital is a big sweet spot for SXSW and it's where a lot of innovation is happening,” says Una Johnston, an Irish-based representative for the festival.

With a background in event management in the US and the UK, Johnston operates as a sales representative for the festival, based out of her home in Cloughjordan in Tipperary. She supports and advises clients, from brands to labels to government agencies, who want to get involved in SXSW.

“If someone wants to position their company or brand at SXSW in some specific way, whether it's exhibiting, advertising, a special event or party, I'll help them manage that and liaise with the guys in Austin.”

A global festival
For a business looking to attach itself to the creative arts, there's no bigger global platform event than SXSW. Kanye West, Metallica, Prince, Jay-Z and Lady Gaga have played a brand-sponsored party in recent years but what industry coming back are the new bands.

So, when should a band consider going to this monstrous mish-mash of industry, creativity, big ideas and opportunities?

“Ideally, you want to go into SXSW with people talking about you, with a bit of a buzz,” says Johnston.  “You've got to be creating the buzz in Ireland and translating that over the Atlantic so people are interested. You can't expect to make something happen there if you haven't built up a head of steam here.”

Some of those are more established than others. Some have managers, some have booking agents and some are at a more DIY level.

How can they expect to cut through the noise? As well as the official showcases, bands often play the brand-sponsored parties and unofficial blog gigs to give people as many opportunities as possible to see them.

For example, Lavery, the Antrim singer-songwriter with great listening numbers on Spotify, will play one of the busiest and best lineups at Spotify House. This year, it includes Chvrches, Vince Staples, Miguel, Jack Garratt and The Kills. Lavery has also been tapped to play Willie Nelson's ranch party, Heartbreaker Banquet, outside of the city of Austin.

Most of the aforementioned bands have a manager and Johnston recommends they register as such. “A manager might go on a crew wristband but that doesn't get them into other shows.”

Even with an industry front, the bands are usually kept on a hectic schedule that requires everyone to dig in.

If you want to be picked up at SXSW by a well-oiled machine, you've got to act like one. It's easy to get distracted by open-bars, free parties and novelty sunglasses in a place teeming with surprise guest gigs and celeb-attended parties but if you do, don't expect to get the best out of the experience for your band.

“You can go and schmooze and have a great time,” says Johnston.  “Or you can go there, have a clear plan of what you want to achieve.”

The next level
Most bands are looking for a connection to the next level, a US booking agent, a label, a distribution partner, sync opportunities, a face-to-face meeting, a publisher or media coverage.

SXSW's delegate database and messaging system makes a lot of those connections easier to forge in advance but if you have a label or manager working for you, it will go a long way in helping get the most out of SXSW.

In previous years, Irish acts already signed to a label - such as Hozier, Villagers and Little Green Cars - capitalised on their buzz grown at home and in the UK by getting global deals or high-profile media coverage. The Strypes convinced even the most hardened industry cynic that kids can still play rock'n'roll, furthering their reputation and their touring schedule in the US.  The Dublin band Kid Karate signed a publishing deal which came about at SXSW, and The Mighty Stef, who have played SXSW multiple times, usually schedule a larger tour around it to make the trip worthwhile.

This year, extra visibility for the musicians will happen at other key Irish events where Enterprise Ireland, IDA, Tourism Ireland, Startup Dublin, The Irish Consulate in Austin, The Film Board and others including music tech companies are participating.

“We're trying to get people to talk together,” says Johnston of the crossover. “We had two meetings where we just talked about what everyone is doing so there's more knowledge shared between all of the bodies. The CD featuring the Irish bands will be available at all the Irish events. It's about letting people know the bigger picture. We'll see where that goes.”

The Irish contingent also includes music-tech companies such as Firstage and Future Audio Workshop; Macnas are performing on the streets of Austin and John Carney's Sing Street and Billy O'Brien's I Am Not a Serial Killer will screen at SXSW.

With thousands of bands in the one place, not every act is going to get what they want out of SXSW. Is there any way to ensure that bands don't leave disappointed?

“I can only remind them of the best practices. If a band is doing it, they need to have cop-on, they need business cards, an elevator pitch in their heads, they need to work the room at their showcases,” says Johnston.  “They need to be good networkers, not just hanging out with their mates. Irish people are better than the English and most of the Europeans at making friends, but we're still not the best at initiating things - but Americans love that.”