They have made their name as one of the most imaginative guitar bands in contemporary rock, so composing music for a 1929 documentary about herring fishermen is a natural progression 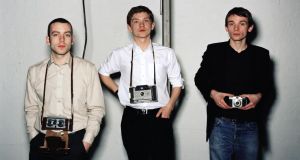 Andrew Moore and Peter and David Brewis: for Drifters the trio fell into the same improvisational methods they practised when they first began playing together more than 15 years ago 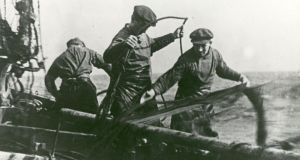 A still from Drifters

When David and Peter Brewis were commissioned to compose a new score for a 1929 silent documentary about a crew of herring fisherman venturing into the North Sea from the Shetland Islands, they reacted exactly how you would expect the aural architects behind Field Music to react.

“We loved the idea,” chuckles David, the younger of the Sunderland-based brothers. “It just seemed like a really fun thing to do at the time.”

Field Music have always been a bit different. Over the course of four superbly diverse albums, the brothers and a rotating cast of supporting live players have proved themselves one of the most creative and imaginative guitar bands in contemporary rock music, incorporating chamber-pop, art-rock and off-kilter rhythms into their sound as a matter of course. That diversity meant that when it came to “prove there’s rhythm in gutting fish”, as David puts it, it wasn’t too big a deal.

Their soundtrack to Drifters, the aforementioned seminal film made by pioneering Scottish documentarian John Grierson, was never intended to be released as an album. The initial commission was made by the Berwick Film & Media Arts Festival for a one-off live performance to accompany a screening of the film in 2013.

“We initially weren’t thinking about recording it at all, so we just recorded things in order to get the compositional ideas down, or to make sure that things were going to fit or that we had something to refer to,” says David. “But we weren’t thinking of it as a record, and we certainly didn’t expect to be releasing it two years later.”

Neither Peter nor David was familiar with Drifters before the process began.

“Our knowledge of film pretty much stretches as far as 1980s teen comedies, I think,” says David. “It was brand new to us; we’re not film buffs in that way. I’m a fan of it now; I’m still not bored of it despite having watched it a great many times, but we weren’t familiar with John Grierson at all. I wasn’t familiar with the idea that there was a point before documentary film-making, and that was a bit of a revelation.”

The project also saw them reuniting with keyboardist Andrew Moore, their childhood friend and the original third member of Field Music who left the band “for a real job” after 2007’s Tones of Town.

Getting back together with their old bandmate meant the trio inadvertently fell into the same improvisational methods they practised when they first began playing together more than 15 years ago. Luckily, that method suited the process of scoring film.

“Before we even started Field Music, me, Peter and Andy would have a few get-togethers where we had very skeletal ideas of something to play, and we improvised together,” says David. “Getting back into that mindset probably was quite important for us.”

You have to wonder, however, how much of the band’s penchant for idiosyncratic time signatures and melodic collisions had to be reined in for a film that was made 86 years ago.

“We kept talking about it, and we especially kept talking about what we couldn’t and shouldn’t try to do,” David says. “Before we saw the film, we had this idea that we’d be having long vistas that we would soundtrack with very minimal things, and spacious things that would be easy to write and that would take up a lot of time. And then we watched it and thought, It’s not like that at all. In lots of ways it’s an industrialist modern film; there are quick cuts and montages, and there’s a lot of movement in it, so we had to do something which fitted that. In a way, that is more natural for us in the way we’d usually write, but it did mean that we couldn’t say, ‘Okay, we’ll just play this chord gently and beautifully for six minutes.’ ”

He doesn't think Grierson would be a fan of the score.

“I think that this is too imaginative, and I get the impression that he would want things that were ‘real’,” he says, smiling. “Once you take that out of the equation, it only makes sense to do things that we thought fit the visual. And at that first performance, especially, there were lots of people there who had come to watch the film and who weren’t so bothered about the band. You could kind of hear them outside, saying, ‘Mmmm, I was expecting sea shanties’ or ‘It was a bit loud’. But mostly, we didn’t try to avoid anything that we would usually do. But unlike how we’d make a Field Music record, it was done for the three of us just to play.”

While Moore will not remain with the band, they intend to continue collaborating, both on his music and on the Brewis brothers’ myriad side and solo projects, which include David’s School of Language and Peter’s The Week that Was.

“I think the Field Music records are more interesting for us after we’ve done different things. We begin to think about things in a different way. And just learning stuff; I still feel that we’re learning all the time about how to write and how to record, and how to use other musicians without really pissing them off.”

And the biggest lesson that they have learned from scoring a silent documentary about herring fishing in the North Sea?

“We also, in a funny way, have a better idea of what our natural tendencies are when the three of us get together and how much sometimes that does end up sounding like the Doors,” he says, laughing.

“That really is a throwback to when we first started playing together, when I was maybe 14 and we started playing in covers bands in pubs around the northeast. Because Andy was a Hammond organ player, we tended to end up playing the Doors, and after 20 years, we still get together and sound a bit like the Doors. So it’s nice to know that that’s still there in the locker if we need it.”

The indie oddballs composed a 2009 score to Robert J Flaherty’s 1934 fictional documentary about the lives of Aran islanders, which depicted everything from potato-farming to shark-fishing. The film attracted controversy for its portrayal of the islanders as primitive, much of which was staged for the film. The soundtrack is great, though.

They had previous form with their outstanding work on Sofia Coppola’s The Virgin Suicides, so it made sense for French duo Air to take on their compatriot Georges Méliès. Their seventh studio album, released in 2012, soundtracks his 1902 work A Trip to the Moon.

This experimental 1929 Soviet Union film – often hailed as one of the greatest documentaries of the silent movie era, if not of all time – has inspired numerous contemporary scores, but the one by Nyman, which premiered in London in 2002, is probably the best.