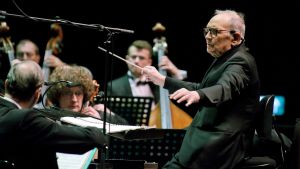 There are hundreds of reasons for the lure of a night out with Ennio Morricone and you’ll find them in the countless soundtracks and scores in his back-catalogue.

Here’s a composer whose work has enhanced and embellished so many cinematic moments over the decades. You can’t hear his work without those images rolling on the silver screen of your mind. Yet Morricone’s work, unlike that of many film composers, also has a deep resonance and powerful impact in isolation.

The maestro is now 87 years of age and is still in fine creative fettle - as the BAFTA-winning and Academy Award-nominated score for Quentin Tarantino’s The Hateful Eight shows. He remains an agile orchestrator and conductor, as this Valentine’s Day appearance in Dublin as part of his 60 Years Of Music world tour demonstrated.

On the stage of the 3Arena, he was joined by the 86-strong Czech National Symphony Orchestra and the 76 choristers from the Kodalay Choir from Debrecen in Hungary.

It’s a huge cast, but this is big music and music which demands such a span and depth to its execution in a setting as this room. It’s also a sound which has often taken the scenic, weirdbeard route over the years, which amplifies its lasting appeal. As the composer noted in a recent interview with Donald Clarke in this paper, he didn’t expect what he was doing to be regarded as revolutionary, but that’s how it turned out.

While there’s immediate reaction in the stalls tonight for the familiar, the music from films such as The Mission, Once Upon A Time in America and his work for Sergio Leone’s spaghetti westerns for instance, it’s fascinating to hear that there’s just as much emotional heft wrung by the composer from his work for less-heralded movies.

For example, it would be fair to say that few here tonight have seen Mikhail Kalatovoz’s 1969 film The Red Tent, about a doomed Arctic expedition in recent times. Yet the passages from Morricone’s score for the film are mesmerising, creating a bittersweet tension and mood. You don’t have to know the plot lines to know when your emotions are being pulled and pushed by a sonic master. After all, Morricone’s job is more than just to add to what’s on screen.

The players respond to Morricone’s pitch with great guile, making for a thrilling, playful and oft times dramatic performance. When the choir add sweetness and muscle from time to time, the sounds achieve even greater force. Soprano Susanna Rigacci predictably brings the house down with The Ecstasy of Gold from The Good, The Bad and The Ugly, but really, the house had already succumbed long before.

At the close and after a couple of encores and ovations, the maestro walks off like a man on a mission. There are still scores to be written, scenes to be underlined and sounds inside that noggin of his to get to the world. There’s may also be an Oscar statue to collect and add to the collection which requires dusting. No doubt too, a 61 Years of Music tour is already in the works.

Fairy forts: Why these ‘sacred places’ deserve our respect
9