A strange and wonderful soul sound from 1980s San Francisco 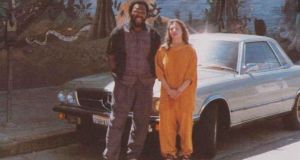 A lot of the music that has appeared in this column has come from parts of the world where distribution was the main reason it remained hidden from our ears. A procession of dedicated collectors and excavators have changed all that. The West African music industry which exploded in the late 1960s and 1970s had been an untapped resource for years. Having been picked apart, the best of it is easily accessible now. Same goes for places like Ethiopia and Mali where so many gems have been unearthed in recent times. I’m grateful to the diggers as much as to the innovators themselves who often made music for music’s sake rather than as the pursuit of some path to stardom.

Part of the pleasure in discovering something new is hearing the back story of how the treasure got put back in the box in the first place. It is for me anyway. Maybe that’s why I write this column.

The tale of Doug Hream Blunt is one of the best yet . For one thing, we’re talking 1980s San Francisco and not 1960s Addis Abbaba.

My first encounter with Gentle Persuasion was a throwback to the days when the record store was the epicentre of the gold rush – a place where comets crashed on ears eager and open.

I strolled into All-City at the perfect moment. When a record is truly great, it tends to give the preceding static the status of a prologue. So it is with this. The languid bassline that kicks off proceedings triggers a wash of strings that introduce us to the smoothest talking, rapping, singing soul cat this side of Curtis Mayfield. With words uncommonly strange, he glides his way through verse and chorus while a strangely beguiling cyclical keyboard riff drifts around the melody. It’s a cliche, I know, but hearing this stopped me in my tracks and rendered me speechless.

It was made by a man in his mid-30s who answered an advertisement about night classes on how to form a band. Somehow miracles happened before the recording was consigned to oblivion. It returns in 2017 courtesy of the ever vigilant Luaka Bop with nine other tunes in tow. Gentle Persuasion is simply divine. Let the music keep your spirits high.