‘Do They Know It’s Christmas?’ to be re-recorded for Ebola cause 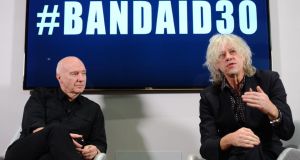 For 30 years it has remained one of pop’s most polarising songs – a track that has raised millions for charity while also being described by Morrissey as a “daily torture” on people. Now it is set for another release.

Bob Geldof and Midge Ure have announced that the Band Aid classic Do They Know It’s Christmas is to be covered for the fourth time, this time to raise funds for the fight against Ebola in west Africa.

The track, written in 1984 by Geldof and Ure to raise money for the famine in Ethiopia, is to be re-recorded by some of the biggest-selling British pop acts, from One Direction, Sam Smith and Ed Sheeran to Adele, Emili Sandé and Ellie Goulding. Bastille and Mercury prize-winning Elbow have also confirmed they are on board, along with Coldplay and Bono – the third time the U2 frontman has contributed to a Band Aid recording.

He said: “We called up some giants, and they said they would come again to the party. Three weeks ago I got a call from the UN saying they required a 20 per cent increase across the board. They are very concerned about the situation in west Africa.”

He added: “It’s tragic that modernity has released this beast in the world. This Ebola. This illness renders humans untouchable.”

Geldof pleaded with people to put aside their reservations about the song in aid of a good cause. “It really doesn’t matter if you hate this song or you don’t like this song, you have to buy this thing,” he said. “I really urge everyone. Don’t download it, don’t look at it on YouTube. It’s a couple of quid. It’s a great thing to do at Christmas.”

Geldof confirmed he had re-tweaked the lyrics to Do they Know It’s Christmas? to reflect the Ebola cause, and said all the proceeds made from the song will go towards battling the illness.

The sleeve artwork for the song will be designed by artist Tracey Emin. – Guardian