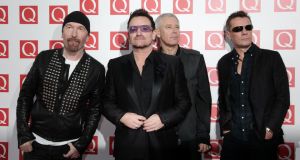 Fifteen back catalogue U2 albums have re-entered the Irish iTunes albums download charts.

The highest re-entry is at number five for the “Joshua Tree” album.

In the world’s biggest music territory, the US, 26 old U2 albums (studio albums, live albums, compilations and extended plays) have re-entered the iTunes charts and a similar pattern is emerging globally.

At this rate, Apple are well on course to recoup the estimated $100 million they paid to U2 and the band’s record label, Universal, to allow the new U2 album go out free to their 500 million customers.

It’s win-win for Apple and U2.

The tech company make money every time a U2 album is downloaded as do the band.

In U2’s case, they enjoy one of the highest ever royalty rates on their sales – meaning they get a far bigger percentage of the retail prize than even Michael Jackson or The Beatles had.

Bono confirmed to The Irish Times last week that the band had been paid by Apple.

In essence, this means even if the band do not sell a single copy of the physical release of the album next month, they will still have made a substantial profit from “Songs of Innocence”.

In addition, Apple have committed to a substantial marketing campaign, which will use the album’s first single “The Miracle (of Joey Ramone) to soundtrack a global television advertising campaign for its new iPhones and Apple Watch.

A person familiar with the talks says the campaign will cost upwards of $100 million.

The ‘Templemore Miracles’: How a fake bleeding statue led to an IRA truce
10

Life, death and the secrets that lie between
Real news has value SUBSCRIBE