Cormac Begley: “You can’t pirate an experience, you can’t download that”

Cormac Begley, founder of Tunes in the Church and Airt School, tells Niall Byrne about letting the character of the musician shine through 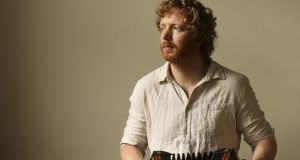 Cormac Begley: “I was looking around at all these leprechaun-type shows, and it’s so far removed from 99 per cent of what traditional musicians do and where their heart is”

It wasn’t always clear that Cormac Begley would follow in the tradition of the family. His mother came from a long line of singers and dancers. His father Brendan is an established button accordion player and singer in a Dingle family filled with them.

Young Cormac’s relationship with music wasn’t as obvious. When his parents brought the likes of Martin Hayes and Johnny O’Leary back to the house to play some tunes late into the night, they weren’t always met with open arms.

“I remember being in bed at three or four o’clock in the morning and I’d be banging on the floor downstairs. My parents would be up partying and playing music. They’re getting their own back now.”

Indeed. Begley is the one playing tunes into the night. The family bug took hold at age 17 when Cormac picked up a concertina. While at college in Galway, he joined the traditional Irish music society and realised music’s capacity for connection and friendship.

Tunes in the Church

While studying Psychology in Galway , he decided to set up Tunes in the Church in St Nicholas Collegiate Church, partly inspired by a concert series in Dingle’s St James Church that had been running for 15 years. Also fuelling the series was the idea to give traditional music a place outside the tourist-trap shows prevalent elsewhere.

“I wanted a respectful environment for the musicians to play which wasn’t there before that,” says Begley. “I wanted to make a home outside of the pub. I was looking around at all these leprechaun-type shows, and it’s so far removed from 99 per cent of what traditional musicians do and where their heart is. They’ll only do that because they need to do it and it can be embarrassing to do those kinds of things. It’s maintaining the stereotype.”

“I wanted the series to have an interactive experience so you can ask questions of the performers. There’s a lot of wit and humour in Irish people and that comes across in our format. Any tourists who come get to experience a real sense of Irish culture.”

Tunes in the Church has been running in Galway since 2008 and has grown from three nights a week over the summer months to seven nights a week during August. The church has a capacity of 140, but while the first couple of years were grim in terms of numbers, the series has established itself with the help of tourists groups.

This summer, the series moved to Dublin’s Unitarian Church for three nights a week, a move that Begley is confident will follow suit, despite his unwillingness to increase prices to tourist levels.

“The bottom line is that most tourists groups want someone who’s running from May to September who is charging €30 a head so they can kick back €5 to €15 a head,” he says. “I can only offer €4 with my margin as I don’t want to go down the road of upping the prices.”

Begley has played music in a professional capacity with the likes of Caoimhín O Raghallaigh, Jack Talty and the band Ré, featuring Liam Ó Maonlaí and Peter O Toole, Maitiú Ó Casaide and Eithne Ní Chathain. Those partnerships have lead to playing music worldwide, along with teaching and participating in workshops at home. Being a bit fed up of the travel aspect, Begley hatched his next plan: to bring students to West Kerry to be taught a skill.

“There’s a natural draw to West Kerry, and the idea is to bring interesting and interested people to that part of the country so that people can learn from the best.”

Courses typically run from Sunday to Friday and usually feature no more than 10 students. Airt offers an immersive environment where they can learn a skill from a practising artist.

The school offers breakfast, lunch and dinner cooked by Cormac’s mother (who is employed along with two locals). They take part in group and individual classes and there’s usually a performance for the locals (if applicable).

“It’s a win for the lecturing artist – they have complete control over what they want to teach, they set the curriculum. I don’t impose any rules on how they teach. They set the price we charge. If there’s more demand, they can do more courses.

It’s good for the students as they get to learn in an immersive environment for a week,” he says. Even during dinner, they are continuing the conversations and learning from each other and the teacher.”

Begley is aiming to keep Airt open to practioneers of any skill, provided there is an interest in it from the public. He’s active in the field of psychology, writing academic papers. His plans include writing a book and a theatre piece informed by his psychology research, that would make that part of his work accessible.

Begley’s combined work of playing music, teaching and running events and experiences keeps him going. CD sales at gigs do help a bit too he says, but Begley leans on the experiential and insights to make his living in music work.

“You can’t pirate an experience, you can’t download that,” he grins.