Craftsman’s rock is the sound of dignified, defiant defeat, and the crowd loved it

Die hard Bruce Springsteen fans are queuing at Croke Park to get as close to the stage as possible. Among them is Aine Carville. It will be her 69th time to see The Boss perform live. Video: Ronan McGreevy 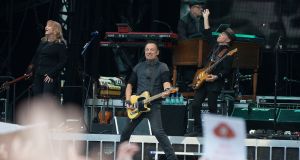 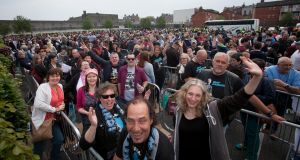 At around 7.10pm Bruce emerges all in black wielding his suitably battered Fender Telecaster, wearing protective wrist guards, a waistcoat and a neckerchief of the kind a hippy’s dog might wear. He starts to deliver a suitably throaty, full voiced, harmony accentuated version of Darkness on the Edge of Town. “Bruuuuuce!” say thousands of very excited people.

Steve Van Zandt flanks him in a long black coat and a bandana. Nils Lofgren solos while windmilling across the stage in an unusual hat. Patti Scialfa and Soozie Tyrell play on the wings. Occasionally Jake Clemons comes out front to channel his late uncle Clarence on the sax. Once he materialises in the middle of the audience.

There are a lot of emotional people in the audience. Bruce Springsteen is a stage of life act. His work soundtracks bittersweet middle-aged doubt and nostalgia like One Direction soundtrack prepubescent possibility.

Bruce thrives on an elusive notion of realness in a world of post-ironic ephemera. In the 1970s and 1980s he took rock n’roll glamour and grounded it in the sort of dirty finger-nailed, blue-collar authenticity beloved by people worried that they were inauthentically white collar or old. (The fact that Bruce’s collars are probably now dyed blue by his butler doesn’t detract from the power of this).

He pre-empted the disappointment of ageing baby boomers. He rejected the fashionable insouciance of 1960s hedonists like Lou Reed and Keith Richards who were too cool to care, in favour of hot-headed conscientiousness and sincerity. Bruce is not too cool to care. Bruce cares deeply. He recast rock n’roll as a hopeful consolation rather than a utopian escape. This is why people my age love him (though, full disclosure: I’m a respectful Springsteen agnostic). Bruce Springsteen is the sound of dignified, defiant defeat.

Watch: Enda Kenny rocks out to the Boss

I can not believe this just happened #springsteen pic.twitter.com/GC6NCXDxsM

And playing live is where his realness comes into its own. He may not actually be a young buck dreaming of escaping a rust-belt factory job, but that sexagenarian really is steamrolling through a 3½hour set with the veins on his neck popping. And you wanted working class credibility? That length of time on stage is more like a factory shift than a rock show and the E Street Band wrangle their instruments like they’re welding rivets (Bruce’s left hand often moves like a piston). Bruce is their Boss in a very real, factory foreman sense of the word (if they were unionised they’d have mandated tea breaks).

Musically, he’s never been an innovator. He’s a craftsman who writes songs designed to be admired like a solidly made bookcase or a well-brewed craft beer, with familiar chord changes and rooted melodies. He arranges them with a sense of classic-rock inevitability – expansive guitar strums from five guitars, connective organ frills, piano vamps, vocal harmonies and big rock beats.

Both effects are overwhelming. To counter this, Bruce creates moments of intimacy with seemingly low key (but actually admirably calculated) acts of showmanship. On Sherry Darling, he wanders out to crowd to slap the audience members’ hands. On Two Hearts he harmonises with Van Zandt and playfully knocks him on the head. On No Surrender he wades up to the crowd with Lofgren and reads song suggestions written by cardboard and held aloft by fans. (He takes these on stage throughout the night, so that he has a stack of cardboard suggestions to choose from).

During the folk mass acoustic jangle Waitin’ on a Sunny Day he both throws a guitar to his guitar tech and gets a young girl up on the stage who sings the song, leads the crowd in a singalong and takes a selfie.

On Spirit in the Night he testifies like a preacher and then the music breaks down until he’s in a call-and-response vocal/sax tryst with Clemons.

Often Bruce shares the mic with his romantic partner (Patti) and his bromantic one (Steve) At several points Lofgren pinion-wheels about on one leg as he wrestles notes from his guitar. At least once Bruce turns his back on the audience and does a little arse-wiggling dance.

He doesn’t say too much, but when he does it’s encouraging. “I’ve got a crush on you Dublin!” he shouts in a fit of geographical eroticism before singing “Crush on You” one of the lesser tracks from The River.

The River itself is glorious. But you knew that. When Springsteen and the E Street band are operating at peak capacity all those major-to-minor chord changes and lyrics of disappointment and hope seem designed to unearth repressed emotions from even the most cynical Irish Times journalist (me). And as the night goes on, the sonic palette expands and the cumulative effect of a 3½ hour musical marathon starts to convert even reluctant audience members (me).

Born to Run (my favourite Springsteen song) is gloriously hopeful. Jungleland is a melodramatically operatic. Because the Night conjures up a ghostly Patti Smith. Dancing in the Dark is enhanced by several enthusiastic dancers from the audience. There’s a video tribute to the late E Street band members Clarence Clemons and Danny Federici. There’s a raucous, glorious seemingly endless version of Shout. And it culminates with an acoustic version of This Hard Land. “The E Street Band loves you!” says Bruce when it all ends.

“Bruuuuuce!” I say, and I wasn’t booing.