U2 singer claims ‘real deliberate misunderstanding of this relationship with Apple’ 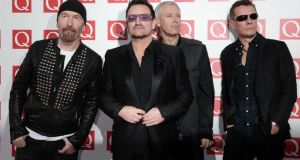 Bono on his critics: “They’re the haters; we’re the lovers. We’re never going to agree. People who would not normally be exposed to our music have got a chance to listen to it. File photograph: Yui Mok/PA Wire

U2 singer Bono has said the blogosphere is “enough to put you off democracy”.

The band’s decision to give their new album Songs of Innocence away free of charge to all users of iTunes has prompted a fierce backlash from those who are not fans of the band.

Approximately 500 million who have iTunes have the album in their folder. As of last week, the album had been downloaded 34 million times.

Speaking in an interview to be broadcast tomorrow on 2Fm, Bono responded to critics “They’re the haters; we’re the lovers. We’re never going to agree. People who would not normally be exposed to our music have got a chance to listen to it.

In his interview with Dave Fanning, Bono also defended their controversial deal with Apple reported to be worth $100 million. The singer reiterated that U2 were paid for the album by Apple though it is free to all iTunes subscribers.

He said there had been some “real deliberate misunderstanding of this relationship with Apple. This is a company which has more than any other technological company, sought to get musicians paid. There’s lots of other technology companies who’ve become very rich on musicians not getting paid. So it’s a perfect relationship to work with them.”

Earlier this week Bono revealed that U2 and Apple are collaborating on a new “interactive format for music” which “can’t be pirated”.

Speaking to Dave Fanning, Bono said his song about his mother Iris, who died when he was 14 was “uncool”.

He explained: “In the name of love/What more in the name of love” - it was as uncool in 1984 as it is now and that’s why people came through the doors. To sing about your faith: how uncool is that in rock ‘n’ roll? To sing about your mother; come on, shut up! Except John Lennon did it, Kurt Cobain did it, Eminem has done it. What is the point in being in U2 if you can’t go to those other places?”

The backlash against U2 has prompted its own backlash. Writing in the Guardian this week Martin Pengelly said “people who think Bono should get over himself, should get over themselves”.

He concluded: But ultimately, if I’m praising Bono and U2 for having the courage of their convictions, I should have the courage of mine. I like them, and I like them as much for their relentless moral crusading as for the way the grinding, accelerating opening of Zoo Station reminds me of being 13. (And no, I wasn’t the coolest 13-year-old in school.) If they ever want to give me an album again, I won’t complain.”

‘Do I really care?’ Woody Allen comes out fighting
9

Is it okay to have children in a time of climate chaos?
Real news has value SUBSCRIBE