Several opera companies are keen to play up the tradition in their productions. It’s inaccurate and unnecessary 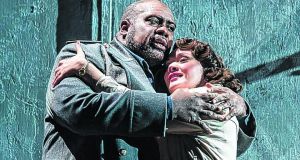 It was Gustav Mahler who famously inveighed against tradition with the aphoristic put-down “ Tradition ist Schlamperei ”, or “Tradition is sloppiness” . The composer’s biographer Henri-Louis de La Grange queries the accuracy of the wording, although he doesn’t doubt the sentiment. He’s traced Mahler saying “What you theatre people call your tradition is nothing but your inertia and sloppiness”, and a range of variations on the idea, including “There is no such thing as tradition. There is only genius or stupidity.”

But tradition or the idea of traditional opera production is alive and well in Dublin, at least in the publicity for opera productions at the Bord Gáis Energy Theatre. The Tchaikovsky Perm State Opera’s Traviata in 2011 was heralded as “the most spectacular traditional staging to ever visit these shores”, which it wasn’t. And the Moscow State Opera’s new Carmen , which opens on Wednesday, is to be “a traditional production with traditional costumes”, in spite of the fact that it’s also being claimed as the first opera production presented in co-operation with the Picasso Foundation, as the set designs incorporate some of Picasso’s paintings. What tradition this is part of is not specified.

Opera North from Leeds were at the Grand Opera House in Belfast last week, bringing productions of Verdi ’s Otello and Mozart’s La clemenza di Tito, both in their original languages, and an English-language double-bill of Poulenc’s La Voix humaine and Purcell’s Dido and Aeneas .

Director John Fulljames has updated the work commissioned from Mozart to mark the coronation of Leopold II as king of Bohemia, to a clinically fashionable present. The sets and costumes by Conor Murphy are stylish enough to feature in a magazine photo-shoot, and the credits also include Finn Ross as projection designer. His contribution includes trompe l’oeil stone wall imagery, which re-configures itself to represent destruction as well as order, and also gives the impression of turning in tandem with the set’s main presence, a transparent central flatscreen (also available for projections), which rotates on a revolve.

In Aletta Collins ’s production of La Voix humaine, an opera with a single character handling a broken relationship on a less-than-reliable phone connection, the setting (left in the 1950s by the set and costumes of Giles Cadle and Gabrielle Dolton ) has been broadened so that the first sight of the nameles s Elle is through the far side of her bulb-surrounded mirror – a frame suspended in a sea of black at the front of the stage.

A scene change effectively flips the perspective, opening up the room, with the mirror now on the far wall. That mirror is used to let us catch a few glimpses of the indifference of the man in the relationship, and at the end Elle disappears behind a shower curtain and re-emerges (by the use of a double) on both sides of the mirror.

The production of Dido and Aeneas takes the mirroring even further. At the start the movements of an emotional Dido contorting on her bed are taken over and amplified by a similarly-clad dancer on the floor. And before you know it, the red-haired Dido is being stalked, haunted and mimicked by the similarly clad red-haired sorceress, witches and dancers of this production. She is a woman haunted by her demons.

Tim Albery ’s production of Otello updates the setting to a US Marine base in the 1940s, with Leslie Travers ’s set presenting grimy walls, passageways and railings. The physical solidity at the opening catches and focuses the voices of the chorus to powerful effect.

So, nothing traditional here at all, nothing that would meet the criteria that the Bord Gáis Energy Theatre people seem to feel Irish opera-goers regard as essential, the comfort of the familiar. And what exactly is that tradition in an art-form that involves such an extreme suspension of disbelief? After all, most people don’t go around expressing their emotional states in arias, or carrying out their conversations in recitative.

If tradition in literature were to be as strict as the BGE Theatre seems to regard the tastes of Dubliners in opera, there would never have been a Tristram Shandy , let alone a Ulysses . Nor of course would there ever have been a Mozart or a Wagner or a Verdi. We would be still back with Monteverdi and his contemporaries. Or, would the break with tradition that opera itself represents even have been allowed?

Have these opera traditionalists never been to a theatre for anything other than a kitchen comedy? Or to a cinema? What are they on about?

To be honest, it’s hard to tell. To get a handle on the issue, I think you have to go back to the 1980s and 1990s when the power structure of the Dublin Grand Opera Society (DGOS) shifted under artistic directors Michael McCaffery and Kenneth Richardson. There were howls of protest when Mike Ashman ’s 1987 La Bohème dispensed with a bed for Mimì to die on. And Richardson’s first full season included a head up a skirt in Rossini’s Barbiere di Siviglia that caused upset among the company’s conservative supporters.

It appears to have been a DGOS phenomenon. When Moscow’s Helikon Opera visited Wexford in 1995 and Dmitri Bertman ’s production of Tchaikovsky’s Pique Dame included the first full frontal nudity in Irish opera, the occasion passed without incident, just like the bare boob in Opera Factory’s Coronation of Poppea did in Derry in 1992.

The BGE Theatre may be engaged in a marketing ploy to coax in a rump of diehard, backward-looking opera lovers. It’s a decidedly unkind move. The productions in question have so far not been what anyone would call traditional. And the targets of the ploy have to be the most unusual opera-lovers anywhere. If they’re strict, they obviously exclude themselves from hearing in the flesh the greatest singers of our time, who, obviously, don’t restrict themselves to “traditional” productions.

My own objection to the marketing ploy is that it suggests to the public at large that there’s a kind of mindless conservatism in the opera-loving community so extreme that you probably need to leave your brain outside if you want to engage with opera, and that values which were superseded from the late 19th century onwards somehow still prevail in opera. They don’t

And Mahler? There’s a great discussion of Schlamperei, and his Fidelio production designed by Alfred Roller in the third volume of de La Grange’s study. A search for de la Grange Schlamperei will get you to it on Google Books. The “traditional” Carmen ? All will be revealed on Wednesday. Oh, and watch out, too, for Kathryn Rudge, whose Annio stole the show in Opera North’s Clemenza .