Ben Folds: 'you sit on the song toilet and nothing comes out’

Swap the first and second verse; remove two beats before the first chorus . . . An acclaimed songwriter reveals his tricks 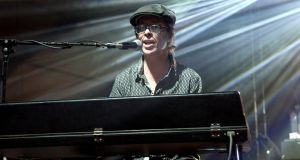 Ben Folds: ‘Find moments in your own life to explore.’ Photograph: Erika Goldring/WireImage

How does a songwriter know when a song is finished? How do you write a good song? What is a good song? How does an impulsive idea become a melodious reality that can elicit emotions in others (and prompt a new Twitter follower)?

For the North Carolina musician Ben Folds, there is no easy answer, but he does have some suggestions. “A three-minute song takes three minutes to compose,” says Folds, who was recently at a workshop with students at Dublin’s Royal Irish Academy of Music. He adds, though, that the decisions made around that three minutes can take up to 15 years, which is how long it has taken him to finish one song.

Folds, who is best-known for his band Ben Folds Five, was in Dublin at the invitation of the US ambassador to Ireland, Kevin O’Malley, under the Creative Minds series, in which visiting American creatives impart their knowledge to inquisitive young Irish people.

His practical advice to students includes methods he employs himself, such as swapping the first and second verse to get away from a “once upon a time” narrative or removing two beats before the first chorus to bring an element of surprise (“because life is full of surprises”).

But a great song requires more than knowledge of terminology, a technique or reaching for that key change into the last chorus. It’s the human input that gives music feeling.

The majority of Folds’s thoughts on songwriting are concerned with that human element: dealing with the inner monologue of a writer, putting your truths into the songs and finding an authentic way to articulate that.

It’s encouraging that Folds, now 48 and an experienced creator with nearly a dozen acclaimed albums behind him, has doubts about his own abilities. Folds says he hates writing songs because the “inner editor” is hard to ignore. “I hate so many of the ideas I have,” he said. “I beat myself up so much about them.”

The process of ignoring the songwriter within is a struggle and isn’t always fruitful. “Sometimes you sit on the song toilet and nothing comes out,” says Folds, chuckling.

As for lyrics, “find moments in your own life to explore”, he says. “When someone does their first student film it’s always a grand idea, but life is about small moments.”

Folds, while being interviewed at RIAM by the musician Neil Hannon, mentions Still Fighting It, a song that juxtaposes a reference to a “roast beef combo” with a father apologising to his son for inheriting his character flaws.

“Yes, you can even write a song about a bus,” Hannon interjects, referring to his 1999 hit with The Divine Comedy, National Express.

The most pertinent thing for songwriters that Folds talks about is finding your own voice. It might sound like something an X Factor judge would say to a contestant, but it’s true. Every artist – from Adele to Dylan to Kraftwerk to ZZ Top – had to find what makes them unique, mainly by covering other artists until their music muscles developed, which Folds says is a stumbling block for many songwriters.

“Any gains you make as a musician, especially technically, generally have the side effect of rendering you unfocused for a short period of time,” he wrote in a recent Facebook post. “Then it sinks in and you come out of the haze, stronger, with a broader palette, sharper pen and more confidence.”

Folds wishes more artists would be honest about the maturation process for the sake of the generation behind them.

“We all like to pretend we came out special and it all just magically happened,” he says. “The truth is that most artists would not want you to see the evolution of their voice. It would be very embarrassing: imitating your heroes, trying on ill-advised affectations.”

Folds has certainly developed his own style. It has been called “nerd rock”, yet you can trace the influences of the great American songwriters, including Burt Bacharach and Billy Joel, in his songs.

His band Ben Folds Five (there were three of them; yes, that kind of nerd) arrived at a time in the 1990s just after grunge, when disaffected scratchy-throated singers in ratty flannel shirts opened the door for something that was so alternative it was practically old-fashioned.

Ben Folds Five didn’t arrive on stage with tuned-down guitars and a message for the youth. There were no guitars at all. Instead, Folds played a grand piano and sang songs laced with wise-guy humour about American life with a rock band’s dynamic.

Folds’s musical passion began with his father’s piano, a record player and a collection of soul music. “I didn’t know white people made music until I was 10,” he tells students at the British Irish Modern Music Institute.

A period of seven years of “miserable failure” involved performing with theatrical troupes in New York and playing as a session musician in Nashville.

At a jury recital at the University of Miami’s music school, Folds turned up with a broken hand after the night before, when he had defended his friend in a fracas. He couldn’t play, lost his scholarship, and, in frustration, threw his drum kit into the campus lake.

He found his own voice the hard way, in front of some labels looking to sign him. After he was spotted playing his unique piano-led songs as a support act, interested labels put on a showcase for him. Folds failed spectacularly, recalibrating his songs and performance to be something he was not and trying on affectations and styles that weren’t natural for him.

“I was trying to make other people happy that night,” he remembers.

Those mistakes led him to embrace his own idiosyncratic style, which has found a sustained audience over the past 20 years. “It took no real effort just to be me, but it took some time and effort to realise that.”