Belle and Sebastian: the stage becomes the dancefloor | Electric Picnic 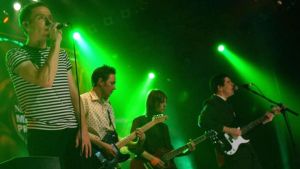 Belle and Sebastian are a bit stand-offish to start with. They’re several songs in before they deign to say as much as hello, let alone try to get the crowd going. But, they don’t really need to.

The Electric Arena is packed with couples, and more importantly, Belle and Sebastian superfans. The band hasn’t played Ireland for many years, and everyone’s excited. Half of the crowd end up on stage, dancing with the band.

The throwback to their debut album Tigermilk, with She’s Losing It, goes down a treat. “We’ll continue with another song about a girl, another crazy girl,” says frontman Stuart Murdoch. The crowd loves it, but it’s all starting to sound a bit samey by the end.