Alt, Nu, Funk, Rap: there are many colours in the heavy metal rainbow 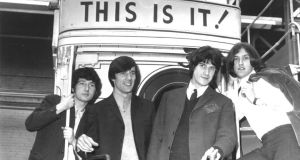 Pete Quaife, Mick Avory, Ray Davies and Dave Davies of The Kinks, at the London Transport Museum in 1964 (Photo by Chris Walter/WireImage)

July, 1964, a hot summer evening. Inside the IBC Recording Studios in central London, Dave Davies is frustrated. Brother Ray has written a riff for the band’s new single – inspired by the song Louie, Louie – but whatever way Dave goes about playing it, it sounds wrong. Reaching for a razor blade he cuts the speaker cone of his amplifier open and tries again. This time the riff sounds jarred and distorted. Heavy metal is born.

The Kinks’ You Really Got Me was the first rock hit to be built around the use of power chords. It became the blueprint for hard rock/ metal music. It was so important that an urban myth swirled around the UK rock community that it was session-guitar-man-around-town Jimmy Page who actually played the guitar part. It would have been more fitting had Page had played it, but it’s simply not true.

People forget how relatively young heavy metal is, even if you can date it back – at a push – to Pat Hare in the 1950s. But of all the musical genres out there metal is the one that has provided the most sub-genres: a bewildering array of musical subsections.

Leaving aside the best-known: alt-metal, nu-metal, funk-metal and rap-metal, and assuming everyone knows the difference between trash, speed and death metal, you quickly find yourself in a world where you really don’t want to confuse your dark metal with your doom metal. The same goes for drone and sludge metal. And that’s without even attempting to broach the nuances that differentiate folk/
pagan/Viking metal or going anywhere near the complex-sounding Mathcore metal.

While other musical genres mostly eschew any meaningful political or religious associations, the metal world is coming down with stances and ideologies. The beautifully named Unblack metal (aka Christian metal) came about because there was a feeling that some metal bands were hostile to orthodox Christian beliefs. Usually sneered at by so-called “true fans”, a band such as Australia’s Fearscape in fact sound as metal as they come.

Politically, what has sullied metal’s name (and put it in the headlines) are the minority who adhere to pathetic neo-völkisch beliefs. More prominent in Scandinavia than anywhere else, these are the neo-Nazi, church-burning, immigrant-murdering cowardly white trash who hide behind rubbish music and hateful politics. But look hard enough and you’ll also find extreme left-wing metal bands and politically engaged black power heavy metal music alongside a healthy Jewish metal scene. The basic musical template may not differ that much, but the message and intent sure does.

It’s no coincidence that today metal is growing fastest in countries with oppressive regimes, notably Iran and China. For all its genre- splitting, commercialisation and in-fighting, metal remains, in the broader socio-political field,a transgressive form of music signifying individuality and defiance of authority.

Last month leading Chinese dissident Ai Weiwei released the first single off his “avant-garde heavy metal” album. With lyrics railing against censorship and human rights abuses in China, it’s as potent – in a political way – as the opening chords of You Really Got Me must have sounded in 1964.
bboyd@irishtimes.com