2Unlimited: there are limits | Electric Picnic

Bogsters, Silk and Cape's: It's an Electric Picnic special for street style presented by Dominique McMullan. 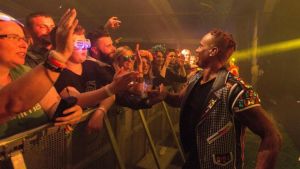 I am totally out of my depth. I had no idea how important time-travelling Dutch musical electricians 2Unlimited were to the Irish people until I found myself crammed into a cross-section of Irish society intent on replicating the dance party from the second Matrix film – shirts off, hands in the hair, yelling away. Oh dear, I thought, now I’ll have to go to that Diarmaid Ferriter chaired 2 Unlimited and the Celtic Imagination discussion in Mindfield tomorrow.

But were they good? Well, they were unlimited. But if anything they were TOO unlimited. A barrage of high-hats and subwoofer accompanying constant demands that we party. They also regularly count to four very loudly. Frankly, I found it very stressful. “No, no, no, no, no limits?” I found myself thinking. “Surely SOME limits are in order. A total lack of limits is just irresponsible.” On reflection, I may not have been the right person to review this gig.

Three word review: There are limits