Before reading this, please note that there will be spoilers and you need to picture me turning to the camera: I’ve binged on all of ’House of Cards’ so you don’t have to 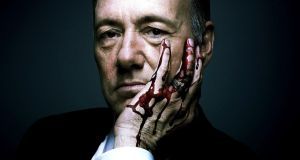 One of the following things does not happen in the new series of House of Cards:

a) President Frank Underwood (Kevin Spacey) urinates on his father’s gravestone while his motorcade waits.

b) President Frank Underwood spits on the face of a statue of Jesus which then smashes to pieces on a church floor. He picks up a fragment and turns to the camera. “Well, I’ve got God’s ear now,” he says.

Two of these things do happen in House of Cards. It’s not the most subtle of television dramas. The logo features an upside-down American flag. In promos, Frank has actual blood on his hands. His shtick is scheming directly to camera. “Titter ye not,” he says. Or is that Frankie Howerd in Up Pompeii? I think murderously ambitious Frankie Underwood prefers evil aphorisms to double-entendres (he’s planning an evil aspirational calendar) and delivers them in a voice somewhere between Foghorn Leghorn and Batman. If the writers could credibly give Frank horns or a robotic claw, they would.

Frank is president now and this season he kills no one outside his capacity as commander-in-chief (there are some drone-strikes, but even Obama does that and he rarely turns to the camera to cackle evilly). But he’s a terrible president. He tries to establish a programme called “America Works”, essentially a plan to enslave the human race by destroying the entitlements of the New Deal. He also helps to turn a peace process into a potential war (sometimes I wish they could throw away the “realist” rulebook and have House of Cards go full mental. I mean, why can’t Frank nuke Belgium?).

Frank’s main antagonist is “Petrov”, a fantastical makey-up autocrat from a fantastical makey-up country called “Russia”. Petrov and Frank play a season-long game of “Yo Mama”. Petrov outmans Frank at functions by singing folk songs, swilling vodka (“Let us all drink and laugh like true Russians,” he says) and ruggedly flirting with Frank’s wife Claire. Frank seethes. He thinks about telling Petrov that he and Claire had a threesome with their bodyguard last season, but realises it will sound weird rather than cool, so keeps quiet. Petrov later boasts that when he was a soldier he killed a man with his bare hands. Frank has only ever killed people super secretly with the help of car exhausts (Pete) and trains (Zoe), so he is dead jealous.

Petrov has personality. Few other characters do. The voters are easily manipulated hicks who find Frank’s insincere, folksy speechifying inexplicably compelling. Rival politicians are idiots who don’t notice how evil Frank is despite his robot claw and ominous self-narration. As for Frank’s allies, I can barely tell Seth, Jackie, Remy and “pen” apart, even though, as Wikipedia informs me, the actors are of different races and genders and, “pen”, is, in fact, a ballpoint pen.

I crave more ex-chief-of-staff Doug Stamper, who starts this series in a coma. He was almost killed by Rachel, the prostitute with whom he was obsessed (a sentence no parent wishes to say about their child). He spends much time drinking, plotting, recovering from his injuries and being psychosexually fixated. “I think we’re inviting the fox into the hen house,” says one character of Doug, before another suggests he might be “a mole”. Now, this may just be bad dialogue, but I think maybe being a grotesque fox/mole hybrid explains Doug’s strange appeal.

Then there’s Claire. Frank and Claire have a wonderfully supportive, polyamorous, evil marriage (there should be guidebooks on “evil marriage”). Unfortunately, not conspiring to murder anyone for 13 episodes puts a strain on their relationship. Furthermore, no longer content to just waft around the White House like the ethereal girl alien from Mars Attacks, Claire craves real power. Over the course of the series, she gains power, symbolically dyes her hair, questions Frank’s loyalty, engages in heavy handed metaphors (there are Tibetan monks involved) and eventually makes a big decision.

That decision is moderately shocking if you’re shocked by that sort of thing. Overall though, season three is underwhelming. House of Cards can’t decide whether it’s a “realistic” examination of actual governance or a ridonkulous thriller. The new series unconvincingly focuses more on the former, so, like in “real” Washington, the pace is slow. It only took Frank two series to become president, so I was hoping that by now he’d be emperor of space and not doing tedious, implausible deals with potential electoral rivals. SPOILER ALERT: by the end of Season Three, Frank Underwood is not emperor of space.

“Well that was around 13 hours,” I sigh, bleary-eyed after my binge.

“Who are you talking to?” asks my wife. I glower. “She’ll rue the day she underestimated me,” I say, looking off to the side at nobody in particular. Then I spit on a crucifix, wee on a grave, punch a puppy and go to bed.