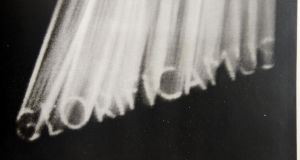 Spread over five days in June 1932, the 31st International Eucharistic Congress was the largest public event held in Ireland. Among the most intriguing of the many astounding images it generated is a photograph of skywriting over Dublin on its opening night, Wednesday, June 22nd. Using equipment from the Theatre Royal, the event projected three words of acclamation on to the night sky: Laudamus, Glorificamus and Adoramus (We praise, We glorify and We adore).

The skywriting was part of a series of spectacular lighting effects. From dusk that day, searchlights on buildings in the city raked the skies; the prayerful message appeared at intervals. At midnight, when Mass was held at churches throughout the city, and the congress was inaugurated with a Mass celebrated by the visiting legate at St Mary’s Pro-Cathedral, on Marlborough Street, the skywriting stopped and the searchlights directed upwards.

The Irish Independent reported that “when the bells of all the churches announced the Elevation of the Host all the beams met at one point in the heavens and formed a perfect cone”. This symbolically turned the focus of the congress on the Eucharist, with the message that, through the consecration, Christ was substantially present in Dublin at that moment.

Such use of technology communicated far more, of course: the congress was not only an act of national worship but also an opportunity for the Free State to assert itself. Rome was assured of the unchanging religiosity of the nation, and the wider world was impressed by the State’s technical prowess and organisational ability.

Sound as well as vision was significant: a public-address system described as the largest in the world was installed to ensure that the vast procession could sing in unison when they converged for the final Benediction, on O’Connell Bridge, at the close of the congress. And despite disquiet from the department of posts and telegraphs about using the national radio service for denominational matters, the organisers persuaded the government to use the national radio service to transmit congress ceremonies through its 2RN and 6CK stations, in Dublin and Cork, and its imminent Athlone station.

Although the skywriting at the Congress might suggest modernity, in 1932 it was a relatively old technique: one of the earliest uses of electricity was the stereopticon projection of advertising with searchlights, used in the US from the 1890s to throw words and images on to walls. Other international events that the congress might be likened to, such as World’s Fairs and Olympic Games, also used lighting effects for entertainment, although, at the congress, light effects were also used at a domestic level: householders were asked to illuminate their homes for the opening night, with bulbs available in papal- and national-flag colour combinations.

Photographs of the skywriting published in the official record and souvenir booklets suggest smoothly engineered letterforms. But they have clearly been touched up; other images reveal the writing to have been splayed and uneven.

For most political historians of modern Ireland, the International Eucharistic Congress of 1932 publicly legitimised Fianna Fáil, the party of former revolutionaries elected scarcely three months earlier. For national and international visitors the sheer spectacle and supposedly unitary emotions it offered was reliant on another style of deus ex machina.

You can read more about this week’s artwork in the Royal Irish Academy’s Art and Architecture of Ireland; see ria.ie