Looking for a pulse among dead Irish writers 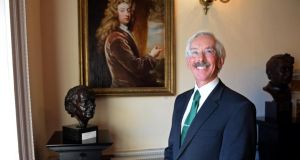 Robert Nicholson has been curatorof Dublin Writers Museum since it opened in 1991, a role that involves checking tickets, manning the reception desk, checking the environmental controls and planning new exhibitions. Photograph: Eric Luke

The Dublin Writers Museum on Parnell Square was opened in 1991 by the then taoiseach, Charles Haughey. Robert Nicholson has occupied the role of curator since then; a not inconsiderable 22 years.

“When it opened, the museum was owned by Dublin Tourism, but we’ve since integrated with Fáilte Ireland, ” he says . Fáilte Ireland is now the employer of all those who work in the museum, which it owns and runs.

We’re sitting in the small bookshop at the back of the building. Nicholson had been in the front hall, issuing admission tickets, when I arrived. A phonecall later, and he has swapped places with a colleague in the bookshop, where we do the interview. There is only one visitor in the bookshop for the duration of the hour-long interview, so his guess that we were unlikely to be interrupted there proves correct.

Explaining the reason for the name – ie why it’s not called the Irish Writers Museum – Nicholson says: “I suppose because it was a Dublin Tourism venture in the first place and therefore we couldn’t claim national status. To most intents and purposes, it does cover the whole Irish literary tradition, as practically all Irish writers have some connection with Dublin.”

The museum appears to have changed very little since this reporter first visited it some 20 years ago. The pre-internet boards with explanatory text about writers are still on the walls of the two main downstairs rooms. There is the same seemingly random pairing of featured writers in certain display cases. Samuel Beckett and Máirtín Ó Cadhain share one such space. At first, I think it’s because they were both born in 1906, as the text panels note, but the audio guide informs me it’s because they both “chose not to write in English”.

“The decision we made at the start, and which is one I’m still reconsidering, is that we would feature only dead writers,” Nicholson says. “The problem is that when they die, we have to find a place for them on the walls.”

How does he choose who should be included, once they’re deceased? “There’s the question of flavour of the month, so you need a bit of historical perspective,” he says.

“Sometimes you have to sit back and wait and see if somebody who dies was as important as people thought at the time. I am trying to think of a better policy on this one; how you actually decide who is appropriate to feature here, whether you’d do it on some kind of points system, or some kind of measure of universal acclaim.”

What does he mean by a points system? “You could say someone has won X number of important literary prizes, and find some way of measuring an achievement in that way.”

There are elements of tokenism in the displays, especially when it comes to writers who have died since the museum opened. Frank McCourt is represented by a bust. Strangely, Jennifer Johnston, who is very much alive, is represented by a large painting, but I don’t notice anything referring to Maeve Binchy.

In the upstairs Writers Gallery, where there are reproductions of paintings held in the National Gallery of Ireland, there is a case dedicated to James Plunkett, who died in 2003. It contains just three items: a curled-up photograph of Plunkett, a copy of Strumpet City and one of Farewell Companions. If they are first editions, there’s no indication that they are.

There are several cases in the centre of this room dedicated to Eithne Strong, a poet born in 1925 who wrote in both English and Irish, and who also published short stories and novels. It appears to be the biggest single exhibit in the museum.

Why does Strong get such prominence? “Because her family gave us a large donation of material which I put in as a temporary display,” Nicholson explains. “It’s been there a couple of years, actually. I’ve been quite busy and haven’t worked out the next temporary display yet. So they tend to sit there until something else major comes along to take their place.”

What does his role as curator involve? “From day to day, I’m mostly at the front desk taking tickets. I don’t have a lofty office away from everyone. I may do the reception job if there’s nobody else at that desk, but I’m not tied to that desk unless there’s nobody else in the room. So I’d be going around monitoring the environmental controls, registering material when it comes in, looking up things for potential new exhibitions, answering inquiries of various kinds.”

Behind the case that commemorates Oliver St John Gogarty, there is a very large damp-looking area on the wall, off which paint is noticeably peeling. A framed notice informs the visitor that “due to water damage to this wall caused by a burst pipe, the photographs in this corner of the room have been temporarily removed until the surface has recovered”.

When will it be fixed? “The wall is quite dry now. We’re waiting for the next paint job,” Nicholson says. When did it happen? “I think it was in the winter two years ago.”

In 2012, 31,052 people visited the museum. No rent is paid on the building, because Fáilte Ireland owns it. How much does it cost to run? “I don’t have that figure. You’d need to talk to the money men.” Does he not consider it unusual that, as curator, he doesn’t know how much the museum costs to run? “No. I’m not there to handle the budgets. I’m simply there to operate the museum.”

There are some charming personal items on show, such as James Joyce’s piano, which is on loan from the Joyce Tower; Patrick Kavanagh’s typewriter; the black Bakelite phone Beckett had in his Paris apartment; and a letter from Mary Lavin written on Algonquin-headed notepaper, but the museum looks very dated. At €7.50 admission fee for an adult, many visitors may expect more, especially as most museums and galleries in the capital are free.

Why is there an admission fee? “I suppose you’d better ask [Fáilte Ireland]. It was set up originally as a commercial visitor attraction, and a visitor fee really is needed to support what it does.”

Curiously static
The thing is, it’s not very clear what the museum does. It seems a curiously static place, where display boards remain unchanged for decades, “temporary” exhibitions remain on show for years, and a significant damp spot waits more than two winters for “the next paint job”. My audio guide fell apart while I was using it.

According to Fáilte Ireland: “The returns from the admission charges cover some operational costs of the museum.” In addition to Nicholson, there are seven employees: three full-time, three part-time and one in a seasonal capacity.

Does Nicholson consider the museum looks dated? “I suppose there are a lot of things I’d like to do to update it, but as far as plans go, again that’s something you’d need to talk to Fáilte Ireland about. It hasn’t had a major update since it started. I can advise them, but I can’t direct them.”

Fáilte Ireland says it is “currently looking into all available options regarding the running of the Dublin Writers Museum. No definitive decisions have been made as yet.”

Before leaving, I ask Nicholson what he considers to be the museum’s relevance today. “What we’re here to do is to present Ireland’s literary heritage, if you like, Dublin’s literary heritage in one building. So that you get a sense of how Irish literature has evolved, what its influences are and how it ties into the course of Irish history.”

When asked if there is anything further he’d like to add, Nicholson says that “donations of material are always welcome”.